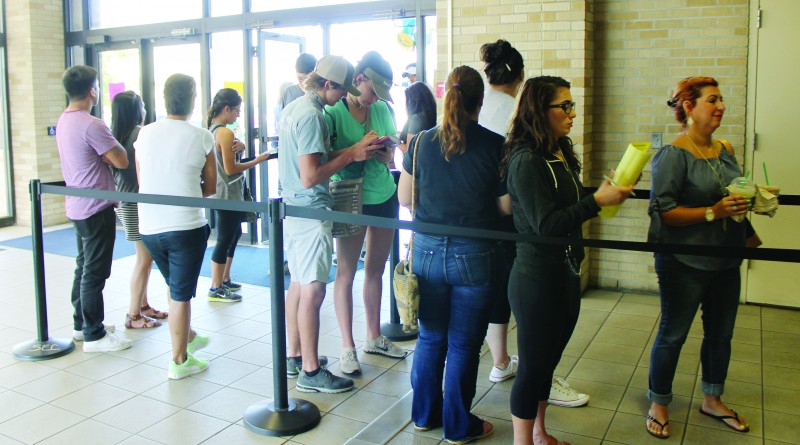 If death and taxes are the only things guaranteed in life, the college equivalent could easily be long lines and paperwork. Students registering for fall 2016 encountered both, but the wait times were not as long as in previous years thanks to several steps the college has taken to ease the registration process.

Peak registration days were Aug. 23-24, and hundreds of students packed the Harvin Center on East Campus both days. Aside from some technical glitches the first day, the process was somewhat smooth, albeit still slow as students waited to see an adviser, register, seek financial aid and more.

Hannah Ruiz, a physical therapy major, was about halfway through the advising line after waiting for 90 minutes.

“You literally have to set a whole day aside,” Ruiz said.

Ana Collins, another Del Mar student, waited in the enrollment line for an hour, only to find out she didn’t have the correct paperwork.

“I have to go get it and then come back and get in line,” Collins said.

Collins and others expressed frustration with having to wait in line only to be sent to another line next.

The frustration was shared by some staff and faculty members who were assisting with the registration process. One staff member expressed how bad she felt for a student who waited all day and finally made it to the front of the line, only to have the server crash. However, the server was only down for a couple of hours and registration quickly resumed.

Patricia Dominguez, dean of Outreach and Enrollment Services, empathized with students and listed several steps her department has taken to ease the registration process.

Since then they’ve been advertising to students so they’ll begin the registration and advising process sooner.

“It can be a challenge to make students aware of important deadlines,” Dominguez said.

Dominguez said her department has increased notifications this year by reaching out to students via email and phone to make sure they’re aware of important cutoff dates.

“We wanted to tell people to get in and pay so they wouldn’t get dropped and let others know that enrollment is open,” Dominguez said.

She explained that in the second week of August, 8,000 students were enrolled. Some 3,800 of those hadn’t paid yet, and 1,500 of those 3,800 had no phone number in the system and couldn’t be reached. Because of this, Dominguez stressed that students should ensure they’re accessing their emails, and that their phone numbers are updated as well.

Although many students were dropped from classes for nonpayment, Dominguez believes that her outreach programs have helped reduce the number.

”All of our efforts on that payment deadline worked. We stripped 1,588 students for nonpayment, but 9,017 did pay after communication from the school,” Dominguez said. She also explained that most of those 1,588 students did not have correct phone numbers on file.

During late registration, Dominguez was out on the floor with her staff, helping students.

Dominguez also has some advice for students registering in the future.

“Get it done early so you can get the classes and schedule you want,” Dominguez said. She nodded at a line of frustrated students who had been waiting to see an adviser for some time. “So you’re not here.”