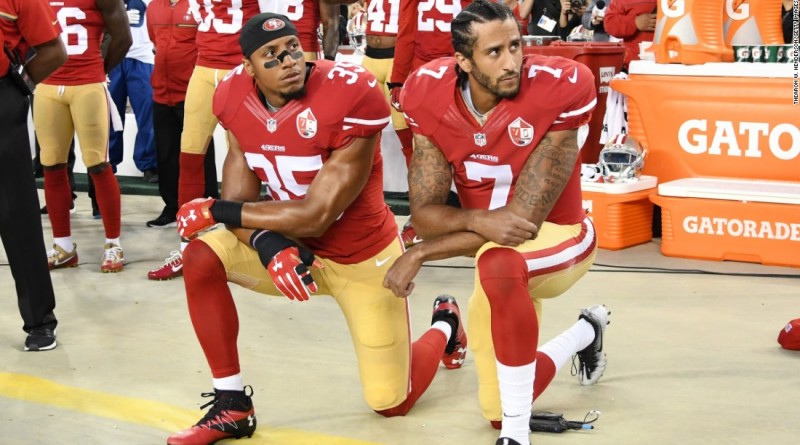 To a degree, all comedy is social commentary and often hits the mark because it allows us to digest uncomfortable truths in a forgiving way. For instance, who doesn’t remember Dave Chappelle’s adventures with his buddy “Chip”? You can find the entire hourlong HBO special “Killing Them Softly” chopped up into bits on YouTube. Dave and Chip are lost in New York discussing current events, when they notice the cops within earshot. “DAVE! It’s the God damn cops…” long, uncomfortable pause,” I’m gonna ask ’em for directions.” If the joke doesn’t read so funny, it’s because part of the punchline is the tension in the room as our already shared understanding of police brutality is called to carpet.

The two competing narratives concerning the Colin Kaepernick pledge protest drive me mad with how they have exploited this issue. This was the first thing Kaepernick commented on when he observed: “Well, I think it’s a misunderstanding. You know the media painted this as I’m anti-American, anti … men and women of the military and that’s not the case at all…”

But I don’t think it was a misunderstanding. Left-wing media seems to have turned Kaepernick into some sort of social justice action figure, while the right-wing media has done all but label him a “terrorist.”

However, maybe it’s the fishbowl in which I live, but Texas conservatives tend to have strong streaks of Gary Johnson-esk Libertarianism in them, and though many may be personally offended by Kaepernick’s activism, almost none would contend it is his right.

The Pledge of Allegiance, like the flag, means different things to different people, and though veterans have been this country’s frontline of defense, I think too often we forget this country was founded by dissenters. The First Amendment calls out the press by offering them special protection to do what they do, and while I know our system of checks and balances involves three branches, there is a fourth — The Press.

It as the press’ civic duty to keep the electorate informed and be their voice. However, the big three media giants, MSNBC, Fox News and CNN, turn every real conversations Americans want to have into a political footballing, and substance pays the price; so when the people’s mouthpiece fails you, what do you do?

When I see Colin Kaepernick on one knee during the pledge, I don’t see a lazy or disrespectful man; I see a man who has lost hope. I see a man who has chosen to take the only symbol that can overpower this 24-hour news cycle full of white noise, and use it as a platform on which to martyr himself, and his career, to expose an uncomfortable truth that kills. If you’ve read this far and still don’t see it, it’s a shame, because you miss out on a wonderful opportunity to show this patriot what America is all about and pick him up again.