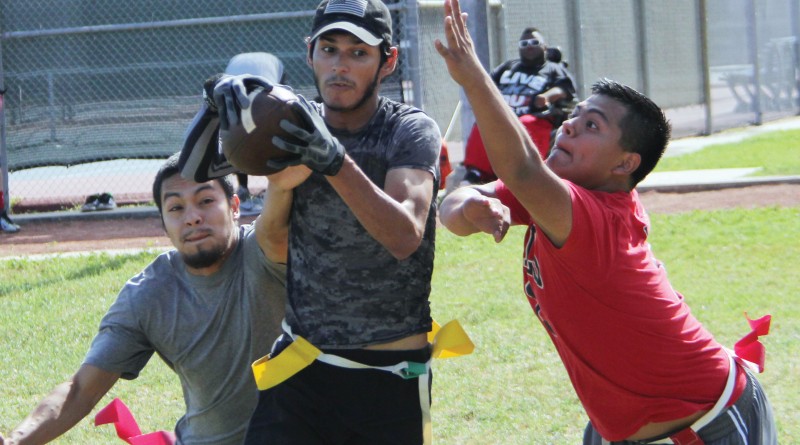 It was apparent that flag football had been the sport most students were waiting for this semester by the early entries in the Intramural Kickoff back in early September. When game day arrived, more than 60 had signed up for what is traditionally Del Mar’s most popular intramural sport. Last year just 24 suited up to play. This amount of impromptu
scheduling and organizing could have easily given the staff a hard time but given how deep the schedule was it seems they were prepared for many students to register late.

“The fact that we have a couple more workers this semester helps so much so that no one is overwhelmed with responsibilities and we knew it would be a large turnout so we all agreed to take it a little more serious,” said Rachel Ramsey, who works with the Intramurals Department. Ramsey has credited all of the preparedness, enthusiasm and organization for this semester’s flag football games to intramurals Director Kristy Urbick.
“Kristy has had us research how to ref the games and she also went out and taught us herself to make sure we were all on the same page which we hope will add structure for the players, causing them to want to continue coming out to our intramural sports,” Ramsey said.
The day finally arrived Oct. 18 for all the former high school football players to once again live those glory days, as well as collegiate students looking for the next sport-related thing to do. Some had honed their skills in the previous day’s Punt, Pass, Kick competition, but it was Casey Carignan who went home with that trophy, aka intramurals T-shirt.

With 60 students eager to take to the field but with no games immediately scheduled to play due to the amount of paperwork required and around 20 minutes going by, it seemed some students started getting impatient and confused to what exactly was taking so long. The intramural staff saved the day announcing a schedule of games for the next two weeks until the playoffs start.