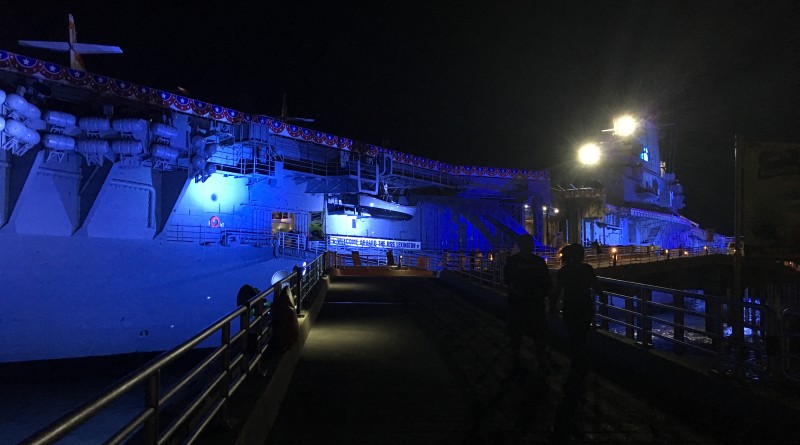 Walking up the ramp to the Blue Ghost Haunted House on October,16 2016.

In honor of Halloween, we decided to try something different for this issue of Economic Crunch. While we’re usually after cheap eats, this time we went in search of cheap scares.

With plenty of haunted houses in Corpus Christi, the Haunting on the Blue Ghost seemed like an authentic choice. With its history of being haunted, the Lexington Museum on the Bay is the ideal setting for a haunted house. I didn’t run into any ghosts, but I did find some other scary monsters and ghouls.

The fun starts by going down the stairs backward to go through what seemed to be an endless hot, steamy maze. We were met with scary children who seemed to find it amusing to laugh at our terror. The wild children are contained and prone to loud screaming.

While the ghosts and goblins aren’t allowed to touch you they do attempt to chase and make you want to run away and never look back. Then after being scared witless you are instructed to climb up some stairs that lead you to a woman with a grotesque face sitting on a chair. She has trickery up her sleeve and might split up your group.

The second level is more interactive and more frightening as there are psychotic doctors and slightly shifty characters who say that they can help you if you follow them. Unfortunately, you don’t really have a choice otherwise. The last boss level is to walk through a maze of clowns, some who are after your blood, and some who simply want to be your friend, your choice. I’m not sure which is scarier.

Overall, the $20 ticket price is worthwhile for the spooky scare and having to only wait less than 15 minutes in line. A dollar of every ticket sold at the door is donated to the American Cancer Society and the Wounded Warriors Project. The next haunting is from 7-11 p.m. Oct. 28-31.

Fright Night is located at 615 Mesquite St., behind Mesquite Street Pizza, and features three unique experiences: Hotel Hell, Tormented Souls and The Dark. Hotel Hell and Tormented Souls are both conventional linear pathways with plenty of terror hidden throughout, but The Dark was the attraction that I found the most fun. You’re sent into pitch-black maze and given a flashlight that you have no control over. Only sensors throughout the tunnels can activate the flashlight, and it was never activated for a good reason.

Be warned: The actors can touch you, though they didn’t really come after me. Maybe because I’m 6-foot-4 and covered in tattoos.

Owner and operator Brandon Gonzalez has been running the attraction for 15 years, since taking it over from his parents, who previously ran it out of a house for charities. Gonzalez now runs it through several buildings on Mesquite Street.

“I love having it in the downtown area because it drives business for everyone in the area,” Gonzalez said. “Not to mention the 115-year-old hotel that it’s built into. That’s scary all by itself.”

For Del Mar students looking for employment, Gonzalez said he hires many of his actors from the theater department. There are still spots available so if you’re interested in working at Fright Night, visit www.frightnighthauntedhouse.com.

Del Mar students who bring a copy of this Foghorn article to Fright Night Haunted House on a weekday will receive a discount.