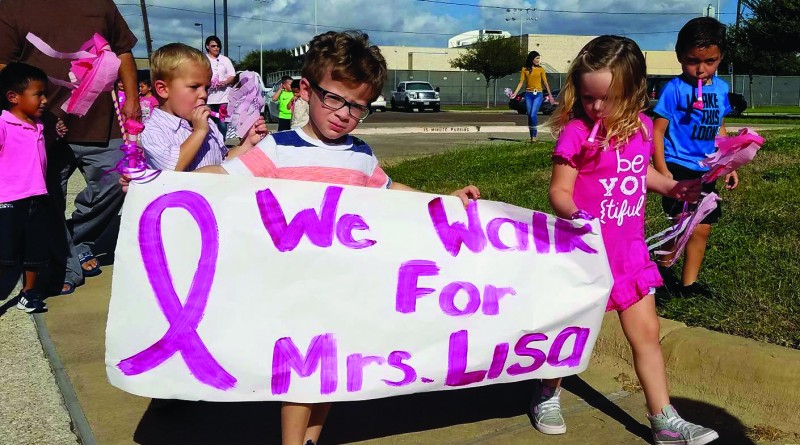 Gunn's students hold a banner they made for her as they march against breast cancer in her honor.

It was an emotional moment when Lisa Gunn, a teacher at Del Mar’s Center for Early Learning, took her pink-clad students by the hand and led them in a march for breast cancer awareness, something Gunn has fought and won.

The center held a “Pink Out” walk in front of its building at the corner of Baldwin and Staples at 10 a.m. Oct. 13. About 40 preschool students dressed in pink and carried with noisemakers, pompoms and signs to honor Gunn, a breast cancer survivor who has been with the center for almost 12 years.

“I’m humbled that they’d honor myself. For them to recognize I’m a survivor, it was really sweet” said Gunn, who described being overwhelmed by emotion seeing her students involved in the event. “I love working with the children; it’s my passion. I’m thankful.”

This is the second march the Center for Early Learning has held for breast cancer awareness, and they hope to continue the tradition for many years to come. The center has been planning the event since the end of last month and the event was made possible not only by the teachers in the center, but also family involvement.

“We do it to support her,” said Melinda Eldrige, director of the center. “We think it’s a pretty big deal that she’s had that battle and came out a success story. That’s not often the case.

“Everyone was on board and I enjoyed seeing everyone involved. I feel like we made a statement in knowing you’re not alone,” she said

Gunn, who was diagnosed with breast cancer in 1998 and declared cancer free in about 2006 after undergoing a stem cell transplant, urges women to take their health into their own hands.

“I was 33 at the time (I was diagnosed); I had no history of this in my family. I had a mastectomy, chemo, radiation. … Be aware. Do annual breast exams and if you feel a lump, go have it checked out,” Gunn said. “Be your own advocate. I’m thankful for my family and I’m thankful to be alive.”