EA’s popular franchise shines by going back in time

EA and DICE takes us to the era of World War I in “Battlefield 1,” the latest installment in the popular first-person shooter series.

After the disastrous launch of “Battlefield 4” and the disappointing “Battlefield Hardline,” fans said the series needed something to breathe life back into it. When it was announced that this latest entry would take place in World War I, gamers were excited, considering the “Call of Duty” series had been stuck in the futuristic setting. The result turned out to be one of the most highly addicting first-person shooters to date.

Right as you start the game up, EA and DICE doesn’t hesitate to bring the action in the first level as you take control of many different soldiers in different parts of a battle. It also gives gamers insight into how intense these battles were for that time period and the first mission of the game is guaranteed to have you on the edge of your seat.

The rest of the campaign is broken up into war stories, telling stories of each soldier who fought in certain sections of the war, from driving a tank to flying a fighter plane. Also, when the player dies it shows the name of the real soldier with his birth and death date, making it rewarding even when you die. The gritty World War I setting makes this campaign mode the best story mode in the series yet. 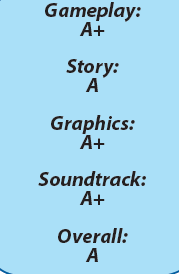 One thing the “Battlefield” series has been known for is its online multiplayer mode. After the beta, many gamers complained about server issues, which was a major reason “Battlefield 4” failed at launch. EA and DICE listened to the feedback as the online multiplayer had few to no issues at launch. You have your four classes, assault, medic, support and scout, like previous installments, but this time it feels fresher. Each weapon has a distinct feel and if used right can make you unstoppable on the battlefield.

In addition to Conquest, Team Deathmatch and Operations mode, they added a new mode called War Pigeons. In this mode, the player must secure a war pigeon to send off and fire off an artillery strike on the opposing team. But the one mode that is the standout of them all is Rush mode, which makes a welcome return after being absent in “Battlefield Hardline.” In this mode, the player must either attack or defend certain telegraphs to advance on each section while the other must hold off their opponents. It also requires you to have a set squad if you want to be successful in these matches.

EA and DICE plan to release more maps detailing more key battles in World War I. And if you get the Premium pass for $50 you get early access to each of the maps weeks before its set release date.

Excellent multiplayer, campaign, graphics and a World War I setting makes “Battlefield 1” a must-have for all gamers. “Battlefield 1” is available on Playstation 4, Xbox One and PC.