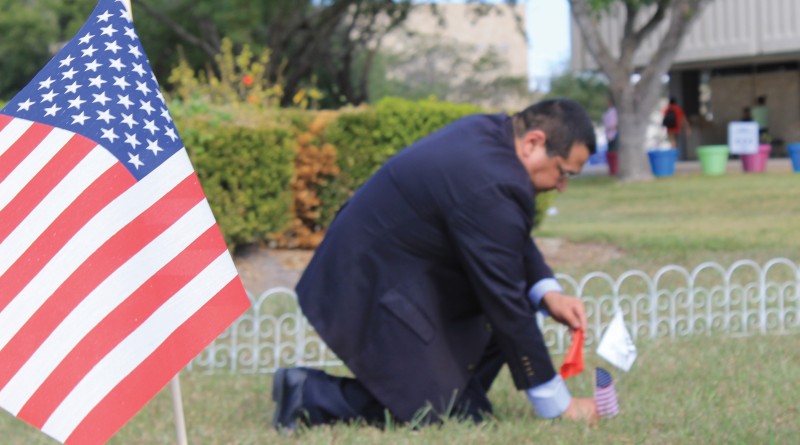 As Del Mar College Vice President Rito Silva took a knee to plant a flag, he couldn’t help but think of his father.

“I think of my dad every day,” said Silva, whose father was killed in Vietnam when Silva was just 8 months old. “I think of the sacrifice he made. I see serviceman here and I think of my dad and how he would be treated. I know I’m doing his name proud.”

Silva joined several other college officials, faculty and students in honoring veterans during a memorial flag service ahead of Veterans Day on Nov. 7.

DMC President Mark Escamilla opened the ceremony by speaking of the importance of Del Mar College’s designation as “military friendly.”

The flag garden, located in front of the administration building, is adorned with red flags for fallen vets and those who went missing in action. The blue flags are for living veterans, and the white represent those who are still serving. The flags will remain in the garden throughout November.

Director of Veteran Services Tammy Micallef discussed her time as a vet, having served in the Navy for 21 years and advancing to chief.

The event raised about $400, which is then given to the Veterans Service Center.

“It buys their coffee, basically,” Micallef said.  She was planting a flag for a fellow sailor who perished in a fire.

“I worked with a young man whose name was FN Ronnie Palm. In September 2001, the USS Inchon suffered a fire and he was the first responder on the scene.  He immediately succumbed to the fire.  He died trying to save his ship —  a most honorable last act. He was a great young man with a bright future.  His girlfriend had just given birth to their first child and he was a rising star among his peers. I was blessed to have crossed paths with him,” Micallef said.

Several veterans were in attendance, including Chris Arcega, who retired as a command senior chief and served in the Navy for 26 years. He works at the Veterans Service Center on the East Campus.

“A lot of vets are taken for granted, especially those on active duty. We’re just doing our part to thank vets,” Arcega said.

The ceremony closed when Mikey Cantu, a music student at Del Mar College, played Taps in front of the American flag, and those in attendance proceeded to plant their flags.

Marie Matlock, another Navy veteran, described the importance of the event.

“This is to honor those that have served, are serving, and have fallen,” Matlock said. “All vets should be thanked. We gave up a lot doing it.”