Latest entry takes players to the depths of outer space

Infinity Ward takes the “Call of Duty” series into the depths of space in their latest entry, “Call of Duty: Infinite Warfare.” While their last installment, “Ghosts,” was critically well received, fans were largely disappointed and felt the series was beginning to lose its charm.

Now part of the three-year cycle with game makers Treyarch and Sledgehammer Games, it’s Infinity Ward’s chance to regain their fan base. Upon the game’s announcement, the first trailer was met with over 3 million dislikes on YouTube as gamers grew tired of the series sticking to the futuristic setting. But despite the negative buzz surrounding the game, this installment has some good things to offer.

The game’s campaign is set in the distant future where the Settlement Defense Front, led by Adm. Salen Kotch (Kit Harrington), declares war on the United Nations Space Alliance with a surprise attack on Geneva. Because of events that take place during the attack, Tier 1 Special Operations pilot Nick Reyes (Brian Bloom) becomes captain of the UNSA Warship Retribution and must take the fight into outer space and bring down Kotch and the SDF.

The campaign is where the game shines as the space setting works in favor of the story mode. You actually feel that you’re a captain of a huge starship as you plot a course for your next mission. Gamers get to pilot a Jackal fighter jet, engaging in intense space battles that will have you on the edge of your seat. Alongside the game’s main missions, there are side missions where you engage in combat with your Jackal, and even assault SDF fighter ships and board them. You can search for upgrades in armories in certain missions for your Jackal or your gadgets and weapons. Loadouts are customizable adjusting to each person’s play style.

Infinity Ward also has thrown its hat in the ring for a zombie survival mode that Treyarch is known for with “World at War” and the “Black Ops” series. But they manage to have it stand on its own with an ’80s-style feel called “Zombies in Spaceland.” It’s a four-player online mode that where you must fight off hordes of zombies in an amusement park called Spaceland. This mode manages to be a ton of fun, and Infinity Ward does a great job having the mode stand on its own. 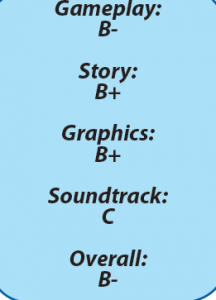 Unfortunately, where the game falls flat is its online competitive multiplayer mode. It borrows way too heavily from “Black Ops III” with the selection of certain specialists and has a special move when your meter gets full. There are many balancing issues in the multiplayer as certain weapons feel way to powerful than others making it unfair to those just wanting to have fun. Hopefully, these issues will be fixed.

If gamers have purchased the Legacy edition of the game, you will get a free digital copy of “Call of Duty: Modern Warfare” remastered for next-gen consoles. The game plays great as it did back in 2007 with updated graphics for the campaign, and 10 multiplayer maps make this a treat for those who purchased. But it’s also a slap in gamers’ faces because if you want to play the remastered version, you must purchase the Legacy edition of “Infinite Warfare” for $80. Either wait for the “Modern Warfare” remaster to be sold separately in the future or just plug in your PS3 or Xbox 360 and play it on that console.

But all in all, “Call of Duty: Infinite Warfare” is worth checking out sometime with a fun campaign, and zombies mode to accompany it. What holds it back unfortunately is the lackluster multiplayer mode and bad business practice regarding the “Modern Warfare” remaster. It’s available on Playstation 4, Xbox One and PC.