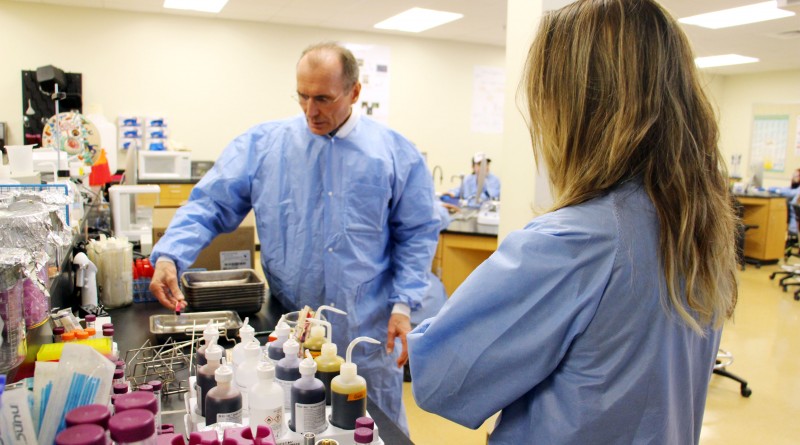 Del Mar College has nominated John Robert Hatherill, Ph.D. and professor of biology in the Natural Sciences Department, as the college’s 2017 Piper Professor nominee for consideration of an award from the Minnie Stevens Piper Foundation.

The Piper Professor Award recognizes professors for outstanding academic, scientific and scholarly achievement and for dedication to the teaching profession. These awards are intended to provide increased recognition of teaching excellence, although the foundation’s selection committee also considers research, publication and related activity.

Organized in 1950, the Minnie Stevens Piper Foundation is a nonprofit, charitable corporation focused on postsecondary education in Texas. Each year, the foundation selects ten Piper Professors from across Texas for their superior teaching at the college level.

Hatherill joined the college’s faculty in 2004. He earned bachelor’s degrees in biology and chemistry and a master’s degree in microbiology from Eastern Michigan University, certification in clinical chemistry from the American Society of Clinical Pathologists in Chicago and a doctoral degree in environmental toxicology from The University of Michigan.

The college recognized Hatherill’s professional growth, accomplishments and commitment to the students in his teaching, extensive research projects, grant acquisitions and management, and student mentoring activities.

Since Del Mar College became the first community college to participate in the SEA PHAGES “Phage Hunters” program, which is a course-based undergraduate research program that studies phage viruses that attack bacteria, DMC students have discovered and isolated 100 mycobacteriophages from soil samples from the Texas Coastal Bend area.

“You can’t teach students self-confidence. They have to experience it. That is a life skill that they get,” Hatherill said.

Hatherill isn’t one to brag about his accomplishments, but one of his students couldn’t help but show his appreciation for all that he has done for him and others.

“Dr. Hatherill has helped me immensely and I cannot understate that enough,” said John Ramirez.

In February, Ramirez won a first-place award for his work on bacteriophages at the American Association for the Advancement of Science’s student poster competition in Washington, D.C., as well as just recently returning from Qatar for the first Word Congress for Undergraduate Research where he presented his research to students and professors from all over the world.

“His influence has helped me shape and mold this part of my life that brought me success,” Ramirez said.

The Piper Foundation will officially announce the 10 honorees in May 2017.