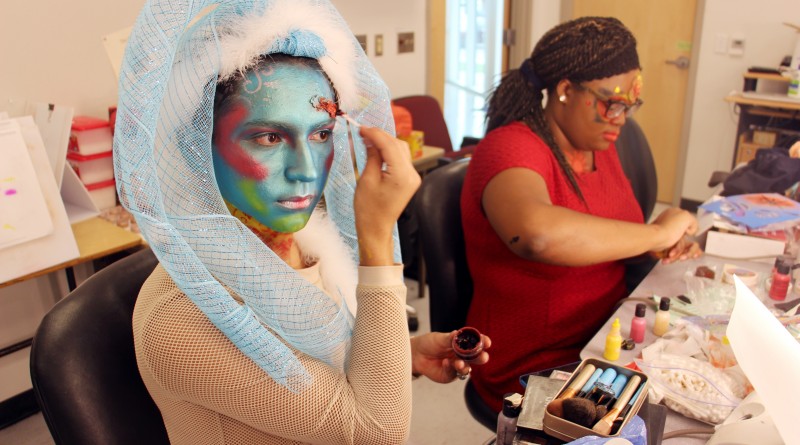 John Ovalle works on his character War-Gazer from the planet Kryptowayian.

“Citizens of Earth, I present to you Project Del Mar, fall 2016,” Emily Sanchez addressed the dimly lit audience as her character, Ursa Mist.

Sanchez and nine of her peers spent weeks cultivating the alien characters they would portray as their final project for their makeup class.

The students said they spent an hour to an hour and a half applying their makeup for the show. Instructor Shara Haghjoo-Modhadam said that on movie sets the makeup

call can be as long as five or six hours a day.

For the project the students were challenged to create a backstory and home planet for their character as well as use prosthetics and special effects makeup to demonstrate their understanding of the techniques they had been learning.

Deborah Clark said she drew her inspiration from ancient Greek and Chinese cultures and, “the theory that civilization came from Atlantis, only it isn’t submerged but an entirely separate planet.” Clark had one of the most intricate makeup designs of the event.

Arianna Perez said she spent an hour and a half applying her makeup. She glued on her own prosthetics and airbushed her own skin.

“I started with the tin foil but it wouldn’t stick so I sat there for half and hour holding it down while the glue dried,” Perez said. “It’s always easier to airbrush other people because you can actually see what you’re doing.”

Perez said her back story was inspired by Medusa but instead of turning men to stone by a look, her victims’ blood turned to ice.

The students had known about the project since the beginning of the semester and had been actively working on them for about three weeks in anticipation of the event.