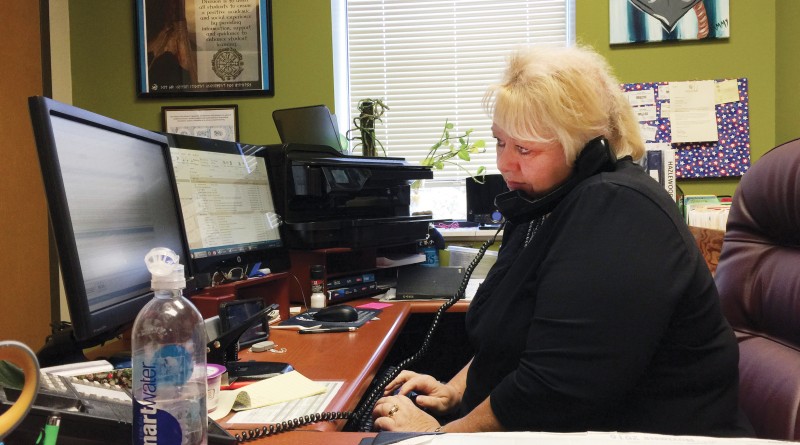 Tammy Micallef multitasks while working in her office at the Veterans Service Center.

When she came to Del Mar five years ago to lead the Veterans Services department, Tammy Micallef didn’t have many resources.

“This was not a department when I got here, this was one person,” said Micallef, a former chief in the Navy. She helped develop the department from a solitary worker in the registrar’s office to a solid department with a staff of seven.

Micallef will be moving on in January to become the director of veterans education at the Texas Veterans Commission.

“Leaving this job is about the hardest thing I’ve ever had to do,” Micallef said.

Micallef described her initial objective of turning the Veterans Services department into a “one-stop shop.”

“It was a big undertaking,” Micallef said. “There were just two of us when I got here. It took three years to get additional full-time staff.”

Micallef, though the director, deals with many cases herself. With a master’s in counseling and a background in special needs education, Micallef has found herself listening to many a veteran simply in need of an ear.

“Many students have come and gone in the five years I’ve been here,” she said. “When they transfer out and go to another college, and a lot of times they don’t receive the same level of service at that other college, they come back and apologize for getting upset with us. What they realize when they go somewhere else is that they really were receiving top-notch service at the Del Mar veterans department.

“We require the students to be accountable for their benefits, but we do provide good service to them and it’s done correctly and it’s done expeditiously,” Micallef said.

As a vet herself, Micallef understands the process of exiting the military and finding yourself responsible for paperwork, something the military typically takes care of for you.

“Sometimes some vets are more mature than others. Being in the military, everything is laid out for you. You know from the time you get to work from the time you go home you know exactly what you’re supposed to do,” Micallef said. “The biggest adjustment I see for my vet students is they no longer have someone telling them exactly what they need to do.”

Veterans looking to use their benefits must ensure they come talk to someone at the center, and make a list of everything they need to do. Failure to finish the process results in the student being removed from their classes.

Micallef said she’s proud to have helped so many veterans.

“I think the PTSD stigma is just that: a stigma. People from all walks of life with all sorts of different experiences can suffer from PTSD,” Micallef said. “A lot of times guys don’t want to go see a counselor but they’ll sit down and talk to me. It’s perceived as a sign of weakness, or it’s stigmatizing because they don’t want people to see them going there.”

After making so many connections, leaving will be hard.

“I love Del Mar, the students, and the staff but I’m looking forward to helping veterans across the state,” Micallef said.

When Micallef moves on in January, Veronica Barbosa will serve as interim director until a new hire is made.

Staff at the Veterans Service Center said they’re sad to see her go, but they have high hopes for her future.

“We think it really sucks,” said Andie Gardner, who works in the center and assists veterans with their paperwork. “We want to keep her in the closet!” Gardner said, before emphasizing that Micallef will be able to do more good from her new position.

“She’s up there now, so she’ll be able to do more for veterans as a whole,” Gardner said.