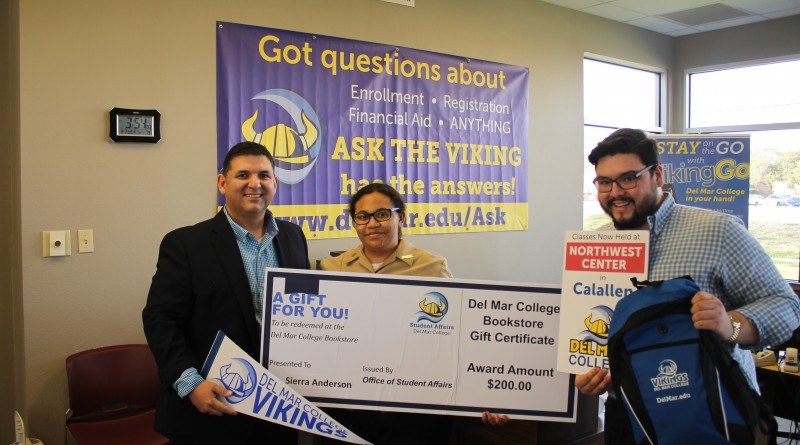 When dual credit student Sierra Anderson registered early for spring, she knew there would be advantages: getting into the classes she wanted, no long lines and one less thing to worry about. What she didn’t expect, however, was to win $200 for her efforts.
“I didn’t even know I was in a drawing,” Anderson said. “(It was) very unexpected.”
The Tuloso-Midway High School student registered and paid for her classes early during the first week of spring registration, which made her viable for entry into the contest.
Del Mar College randomly picked three names from a list of people who registered in the first week of spring registration. Each received a $200 gift card to the campus bookstore.
Anastasia Garza and Rena Pena received their gift cards the first week of February in the Harvin Center outside the bookstore. Anderson received hers at Del Mar’s Northwest Center located in Calallen.
Chris Hernandez, vice president of student affairs, says he hopes this will encourage students to register early for the next semester.
“It pays to do it early,” he said.
After graduating from Tuloso-Midway, Anderson plans to continue to attend Del Mar and hopes to become a registered nurse.