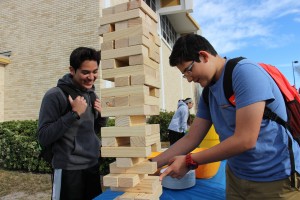 Dozens of people gathered near the Kinesiology Building to enjoy free food and play cornhole on Jan. 26 to celebrate the kickoff of the spring intramural season.

Intramurals Director Kristy Urbick was pleased with the turnout and hopes to continue growing the program from a participation-filled fall semester.

“I’m looking forward to seeing new faces like last semester since that’s what helps get the word out but also retaining all those who tried out for any event last time is important because they’ll be the ones to show the newcomers how to properly play,” Urbick said.

One of the party attendees, student Gage Freeland, said he was most excited for flag football. This was to be expected from someone holding a football but what was interesting is when he explained that in his senior year of high school he transferred from Bastrop to May High School and won the starting quarterback job and took the team to the 1A state championship game in 2014 at Dallas Cowboys Stadium.

Anyone looking to sign up for flag football before it starts on Feb. 7 should go by the Room 108 of the Kinesiology Building.

Urbick is looking to build a culture inside intramurals where everyone is involved and passionate about the sports so that anyone with similar interest can feel as if they belong.

“It’s a great feeling when you set up these events and see the students able to govern and run it themselves because it maximizes out participation which is what you want as a sports player; you want to see your teammates and opposing teams actually trying as opposed to putting no effort,” she said.