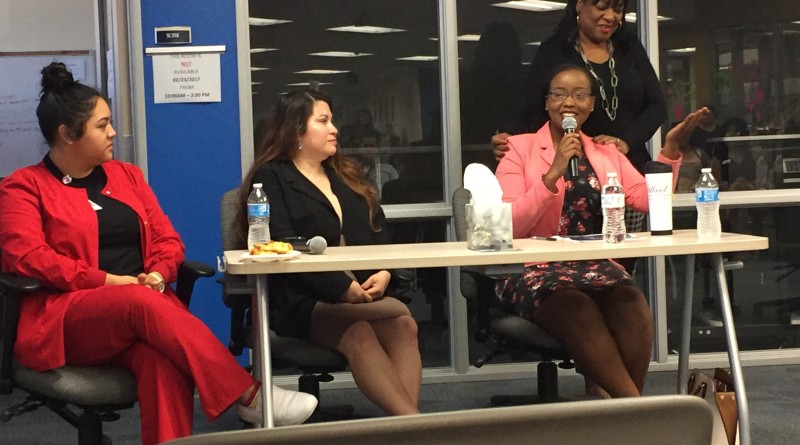 A former Corpus Christi mayor says she wouldn’t be where she is today without Del Mar College.
“Del Mar gave me the foundation I needed for the rest of my schooling and the rest of my life,” Nelda Martinez said Feb. 23 at the Your DMC Journey speaker series event.
Martinez was one of several speakers at the event, which brought alumni back to share their stories. Omar Lopez, Denise Mugabe, Jennifer Gracia, Melinda Sioto and Bobbie Lopez also spoke.
Each speaker talked about their time at Del Mar and how it helped them in the future. A question-and-answer session followed.
Lopez, AEP Texas communications manager, told the crowd how one of his mentors “dragged him out of line” to register as a journalism major to make sure he went on the right track. This one caring teacher “changed my life completely,” said Lopez, who added that Del Mar made him who he is and helped him go on to have a successful career.
Martinez spoke about how Del Mar helped her when she needed it the most.
“When I asked for help, Del Mar helped me. When I needed help, Del Mar helped me,” said Martinez, who also thanked Del Mar for the not judging her and for making sure she always kept “the bar high.”
Mugabe, a business administration and communications graduate, told of how she moved from Zimbabwe to Corpus Christi to go to Del Mar.
“My uncle spurred the idea of going to college at Del Mar in my mind. Before I knew it, I was on a 26-hour flight to Corpus Christi,” Mugabe said. She told the audience to “get involved in student life.”
Mugabe said Del Mar “continues to pave the way” for her and that it helped her become the first Del Mar student inducted into the All State Forensic Squad for speech writing and speaking. She also said she had a lot of challenges “being an African and a woman” but that Del Mar helped her the continue on.
Jennifer Gracia, a current communications major and tutor at Del Mar, spoke about how Del Mar helped her face all the challenges in her life.
“I had a stroke recently and luckily Del Mar is a supportive place that will help me no matter what,” said Gracia, who also told the crowd use the services at Del Mar to succeed.
The final speaker on the panel, Lopez, a nursing major still at Del Mar who was filling in for Sioto at the second session, said, “being at Del Mar made me confident makes me confident,” and that Del Mar wants to you to succeed.
Mugabe gave one of the most emotional moments of the event when she spoke about why her education and her time at a Del Mar matters so much.
“I didn’t know how I was going to pay for college originally, being an international student I didn’t get financial aid,” but someone overheard her and told her about scholarships for being a campus tour guide. Because of this, Mugabe was able to attend college.
“My grandma told me that you’re allowed to have two husbands,” Mugabe said, “one being a man and the other being education. However, only education will stay with you your entire life.”