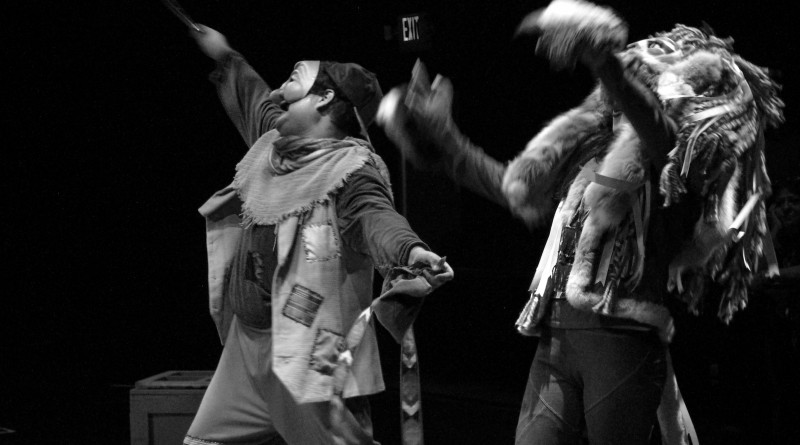 There are conflicting views over the idea of remakes. “Androcles and the Lion” is originally a Greek play written by Aesop. The play follows Androcles the slave, who takes a thorn out of a lion’s paw. The lion later returns the favor by saving him from execution for running away from his slave life. Now imagine this play revamped as a comedy for kids. This is what Del Mar’s own Kim Frederick did.

Frederick, a drama professor, and his students debuted the play April 7 in the Fine Arts Center. The first thing people notice about this play is the stage. The stage and its props were all made by Del Mar’s technical theater students. The paint job alone on the main stage looks like real plank wood panels.

The way the stage is set up is known as a stadium theater, where the audience surrounds the stage. The actors not only used all the space available to them by running on and off stage but also into the audience. This helped actors break the fourth wall by making comments about the play, increasing audience interaction. As if the stage wasn’t captivating enough, the actors on an individual level all stood out for one distinct reason: their costumes.

The colors seen in each of the actors’ ensembles help people universally understand their character. The significance of the kneecaps on all actors was not only an interesting fashion choice but also made it easier for the actors to fall over on and off stage. They all also wore Converse for ease when they ran around but I also feel it played well into the mix of clothing in their individual costumes. The masks and makeup exaggerate the facial expressions so people sitting far away and all around can make out the face.

Finally, when it comes down to the play itself, there were laughs to be had all around with well-timed sound effects and actors’ mannerisms. They all took their characters to the extreme and for a children’s play that is a must.

There is a fine line between exaggerating a performance well and exaggerating it to the point it’s ruined. Del Mar’s actors did a fantastic job not crossing this line, giving a lovely children’s performance of an already amazing play.