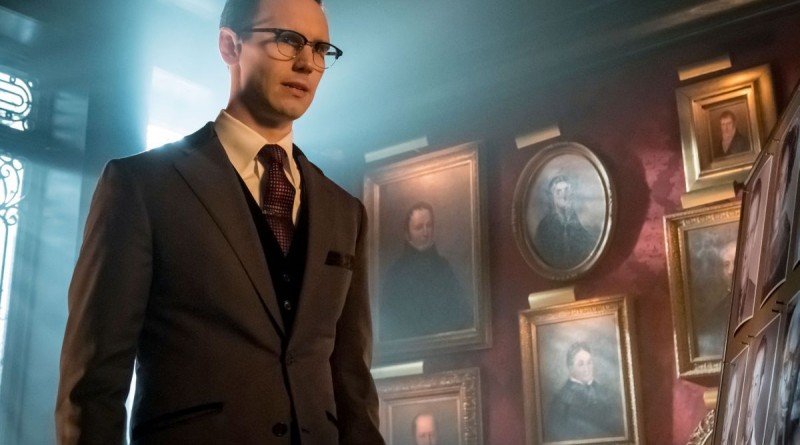 After the conclusion of the Mad City story arc we once again return to the city of Gotham with this new story arc called “Heroes Rise” in “How the Riddler Got His Name” in the mid Season 3 premiere on April 24.  After numerous references to the Killing Joke storyline in the comics and myriad head games in the battle of young Bruce (David Mazouz) vs. Jerome (who could be thought of as reflections of each other), the audience is plunged into Edward Nygma’s (Cory Micheal Smith) identity crisis.

In this mid Season 3 premiere, I really enjoyed watching Nygma struggle.  From my perspective it brings about personal character growth.  From my perspective his struggle is intensely real.  He’s engulfed in a psychological conflict in every facet of his life, whether it be his love life or dissension with his own personhood.  I’m focusing here on Nygma because the premiere is centered primarily on his rebirth as the Riddler.  The pacing of this episode is amazingly tantalizing because I believe the viewer is just waiting and hanging on for the first word from the Riddler incarnate.

To me the furtherance of the Court of Owls plot line in this episode is timely and brilliant.  That move by the crew will prove most effective in the future as Season 3 develops.

I enjoy very much the development of the young Bruce and his doppelganger and I’m eager to see what avenue that plot line goes down.  For some time now I’ve enjoyed watching Ben McKenzie as Gordon because he really embodies the role.  The passion for the role is there and he really illuminates the conflicts a comic book Gordon would go through.  Robin Lord Taylor in my perspective immensely captures the nastiness and villainy of the Penguin.  In the previous season I enjoyed the narrative involving the Penguin and Nygma.   There has been numerous speculations that young Bruce will become Batman by the end of the series.  Whatever form that takes I don’t care much because I’ve reveled in every minute watching David Mazouz play young Bruce Wayne.  It’s fun to see Bruce Wayne develop as a kid as he plunges deeper and deeper into the sins of Gotham city.  From my view it’s engaging because Bruce is slowly realizing that survival is all that matters in life.

After a series of physiological battles between Nygma and Penguin and setbacks faced by the GCPD, the Riddler finally arrives in Gotham great suit and all.  This is a Nygma centric episode and he has come a long way and I think his character development has just begun.  It will be interesting to see what the writers of the series do with the Court of Owls plot line.  Overall “How the Riddler Got His Name” is a great start to the back end of Season 3.  Creator Bruno Heller continues to embrace the similar dark tone that garnered him praise in “The Mentalist” and it works well.

Gotham whether it be in the comics or here on television in my opinion has always been a city of darkness that deserves to burn.  But Batman because of his goodness desires to save it.  Two things are noteworthy here.  Justice in Gotham always takes a weird turn and is adaptable and the Batman is coming soon. Gotham airs on Fox at 7 p.m. Mondays.