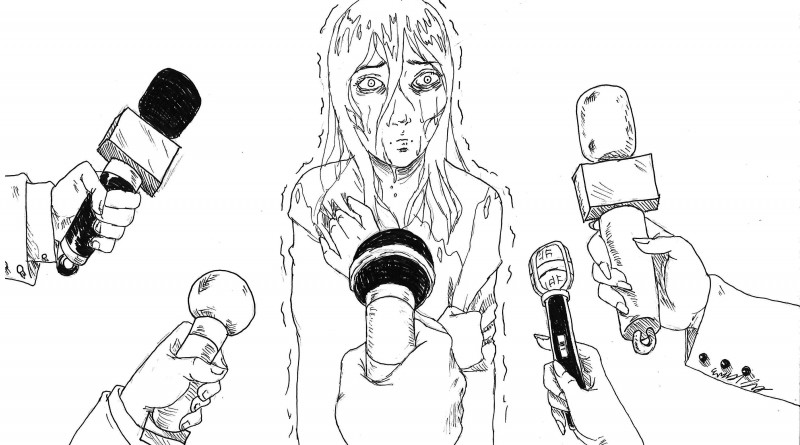 As people are watching the news with shock, many are discovering the ups and downs of natural disaster coverage. Journalists and photojournalists work their way through the storm to report and inform for the safety of the public and give hindsight to events.

CNN reporter Rosa Flores got mass criticism on live TV for her interview at a Houston shelter with a woman named Danielle, along with her children who had just arrived. Tired, frustrated and clearly in shock, Danielle shared her rescue with the reporter saying, “We had been there like five days with no food and no lights and nobody came, nobody came.”

Overwhelmed with the flooding and feeling like nobody was going to save her kids and herself from the storm, Danielle becomes outraged during the interview, lashing out: “Y’all sitting here, y’all trying to interview people during their worst times.”

Flores apologizes by saying “sorry.” Yet Danielle continues to say, “Like, people are really breaking down, and y’all sitting here with cameras and microphones trying to ask us, ‘What the f— is wrong with us?”

Social media accounts on Twitter were blaming the media for exploiting and dehumanizing people during natural disasters but also on a regular day-to-day basis the media receives criticism on how they’re performing their jobs. The media is being blamed and shamed for almost everything now.

National and especially local journalists report day and night to ensure the safety of others during a disaster. As we saw here in Corpus Christi before and after the hurricane, Caller-Times workers were out covering the catastrophe, reporting on the few gas stations opened, the destruction, and almost everything that needed to be covered for the public.

Natural disaster coverage should and usually is handled with different care. Flores seemed to have asked for permission before interviewing on air. However, we don’t know how their prior discussion was handled and how she was asked to be interviewed. Although as the video details, Danielle was in shock and had just arrived with her children. Analyzing the situation, there should have been no interaction with Danielle and her children until they were dried and fed and as comfortable as that situation could be.

Flores’ interview wasn’t intentional and wasn’t for the views, at least it seems that way. When doing an interview, the person should feel comfortable in telling their story and should not be pressured in doing otherwise.

In a time like this, there is uncertainty and chaos and a reporter doesn’t know if an interview will turn into outrage.

First and foremost, coverage should be ethical, considerable to the impact of the person and empathetic. An interview is to grasp the perspective and to humanize the story for readers or viewers, never to dehumanize or exploit a person.