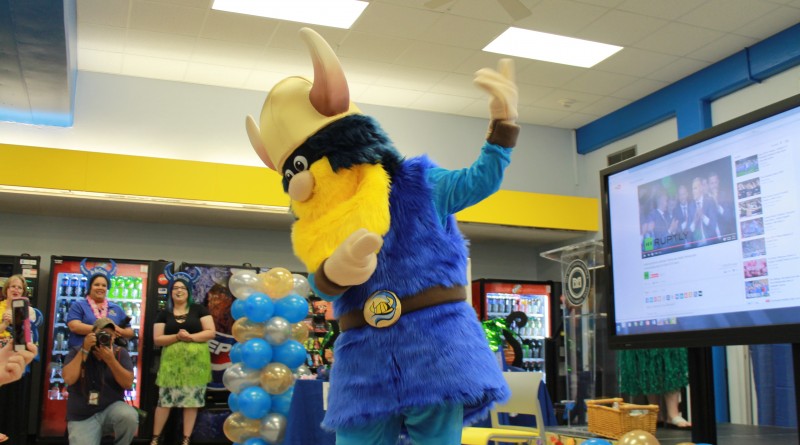 Del Mar College’s Viking mascot needs help finding a brand new name, and the student who submits the most popular one will win a $1,000 Viking Card to be used on campus services.

“We want this to be exciting, fun, just like when we revealed the mascot,” Student Government Association adviser Beverly Cage said. “We want that same high energy to come to the naming of the Viking.”

Del Mar College debuted the new character mascot in the spring semester. Originally having a Scandinavian name with 15 consonants and no vowels, he turned to his new home for a new name.

Since the reveal, the Viking has had a positive reception with students.

“He was friendly and approachable, he danced and the outfit looked nice,” student Ricardo Garza said.

Garza said he would like to name the mascot Victor.

“I would name him that because he’s victorious and people would think of him as a leader,” Garza said.

Local resident and former Del Mar student George Viada also saw the Viking and gave him a name with a meaning.

“He looks cool and I would name him Markie because he is on the mark for success,” Viada said.

Those who participate can submit as many names as they wish. If two people submit the same name, the first participant will receive the nomination. Online submissions for names begin on Sept. 11, and anyone can submit a name. Submissions can be made at www.delmar.edu/nametheviking.

“We would like to include students, staff, faculty, alumni, Coastal Bend residents and get everybody involved in the naming contest,” Cage said.

“Our goal is to announce the new name before the end of the fall semester 2017,” Cage said.

The college will reveal the name during an event later this semester. The winning contestant will be awarded a $1,000 Viking Card to use on Campus Dining, fine arts event, books, tuition and other campus services.

The mascot will make appearances at local schools and Del Mar College events.