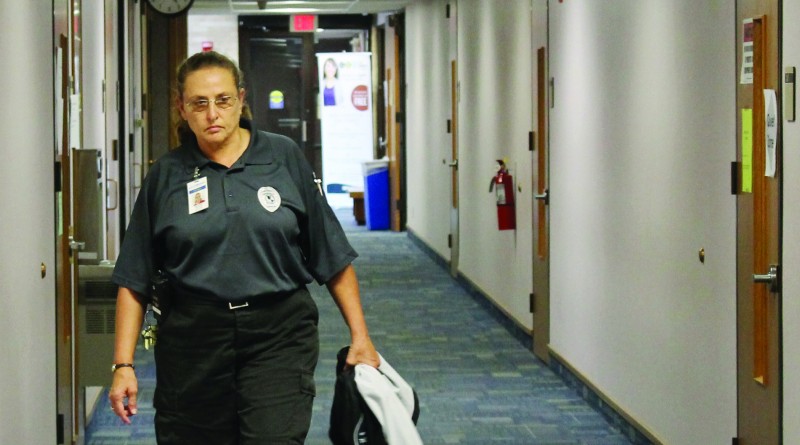 Faculty and students in the Venters Building may have seen a security guard monitoring the building recently and wondered why. It’s because for several weeks, the fire alarm system has been offline.

According to Robert Duffie, director of Physical Facilities, the fire alarm system is still functioning, but it is not being monitored by the monitoring company.

“It is an older 1980s system for which parts are no longer available,” Duffie said.

Other parts have been used to keep the system functional temporarily, Duffie said. Because the system cannot be maintained with original parts from the manufacturer, it has to be upgraded to a system that meets the current fire safety codes.

“We are currently negotiating the contract terms with a fire alarm installation company to install a new fire alarm system. The old fire alarm system was operational and ‘grandfathered’ until it suffered a failure that could not be fixed,” Duffie said.

The Venters Building is under “fire watch” until the system is back online, according to Randy Paige, Corpus Christi fire marshal.

“Fire watch means that there is a security officer in the building actively walking and monitoring the area. If there is a fire, they will call it in,” Paige said.

“This system can only be used for six months, at which time the new fire alarm system must be installed and pass inspection,” Duffie said.

Many Del Mar and Collegiate students who go into the building never knew the fire alarms were not online.

“I didn’t know the fire alarms weren’t working. It is a concern for us on not having an active fire alarm but at least we have a security guard patrolling the floors so I feel safe,” said Alvaro Ramirez, GIS major.

Drue Jones, an associate professor of business administration, had noticed the increased security and thought someone had made a threat to the building.

“I didn’t know the reason why there was more security in the building but now I know that it’s because of the fire alarms. This is a fairly old building but we don’t have chemicals or science labs here to cause a fire. … I do feel safe with the added security,” Jones said.

When Gerald “Craig” Brashears, chairman of the Faculty Council, heard there was an issue with the fire alarm in the building he went directly to President Mark Escamilla and Kelly White, director of Environmental Health and Safety, to express concern.

“This is vital for the safety of our students, faculty and staff,” Brashears said.

The fire alarm system is expected to be back online by the start of the spring semester.