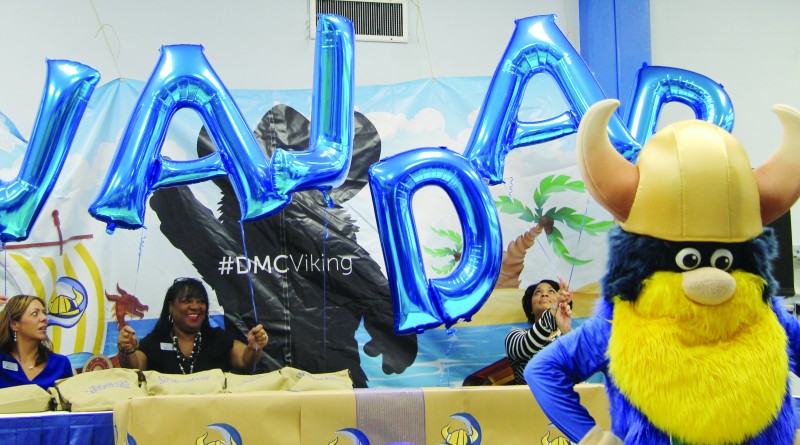 Almost seven months to the day since the Viking landed at DMC, he has been named.

Student Danielle Garza led the audience in DMC’s “Viking Thunder Clap,” then presented the Viking with his birthday gifts, the letters of his name in balloon form, at a Nov. 16 rally in the Harvin Center.

One at a time large blue letter balloons appeared, spelling out “Valdar.”

“The Viking has been a symbol of the school since 1939,” Garza said.

Alexandra Lasso, a health information technology major, is the student credited with the winning name out of over 850 submissions. “I’m really proud to have named the Viking,” Lasso said.

“I entered a lot of names but Valdar was the first one and it was my favorite,” Lasso said.

Lasso received a check for $1,000 in “Viking Bucks” for submitting the winning name and said she plans to use the money to pay the tuition for her summer classes.

The Viking has already become a great ambassador and symbol for the school, said Rito Silva, vice president for student affairs.

“I know everyone has been waiting patiently, including the Viking,” Silva said. “It really is the perfect name; he will help lead our campus and community in pursuit of a better life.”

Silva and the Viking recently visited Fannin Elementary in an effort to create what Silva calls “college going culture” in young kids.

“I knew the mascot was a success the first time we took him to an elementary school,” Silva said. “I saw the student’s reactions. I had kids coming up to me telling me about their cousins and siblings that go to Del Mar and now they want to go to Del Mar.”

Silva said he was pleased with the naming contest. Students and community members could nominate names, then students could choose their favorite name during several rounds of voting.

“We’re so happy with the naming process,” Silva said.

Silva has headed up the planning committees in charge of creating and naming the mascot.

“We wanted to be inclusive of our students and community,” he said. “We could have hired consultants but it just wouldn’t have meant as much.”