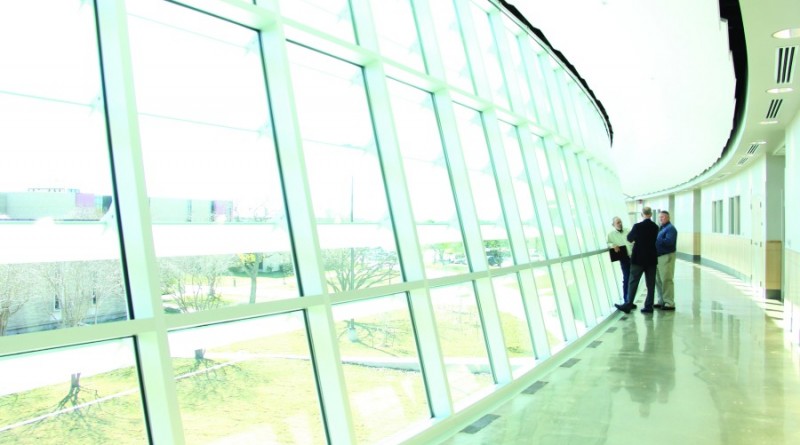 Strolling around the East Campus, its hard not to notice the mid-century design of the new music building.

Completed in fall 2013 and opened in January 2014, the structure was designed to accommodate updated facilities for music majors. Its glassy, multi-layered exterior gives the building a grandiose appearance, and its vast space provides a much improved level of services for students studying musical theory.

“In addition to its impressive appearance, the building both has an open and secluded interior space in which to comfortably study and practice,” said Mike Cantu, a music major and trumpet player. “The building’s new technology has definitely enhanced my musical learning experience as well.”

The redevelopment and construction that the Del Mar campus has recently been undergoing is an ongoing effort to further enhance and modernize the learning experience for all students, and the music building has become a prime example of how new improvements in design and construction can better facilitate them.

While the main purpose of any new structure is to provide comfortable and efficient interior working space for its occupants, any new mastery in exterior design will provide a structure with a measure of artistic merit as well.

Famous musical and performing arts venues, such as Carnegie Hall in New York City and the Sydney Opera house in Australia, are prime examples of such architectural mastery, and Del Mar’s music building has also maintained its own unique identity on the campus as well.

“The new facility has definitely exceeded expectations, and its ultra modern technology is state of the art,” Bridges added.

Del Mar’s music building can truly be recognized as a strikingly impressive addition to the college campus. Its inspiring design, by the architectural firm of Richter Associates, distinguishes it as a new prototype for which other college campus structures can be modeled.

“The structure has provided our students with an even more inspiring environment in which to appreciate the music experience,” Bridges said of the $8.2 million facility.

For information on Del Mar’s music program or on upcoming performances by the Corpus Christi Chamber orchestra, contact the Music Department at 361-698-1211.