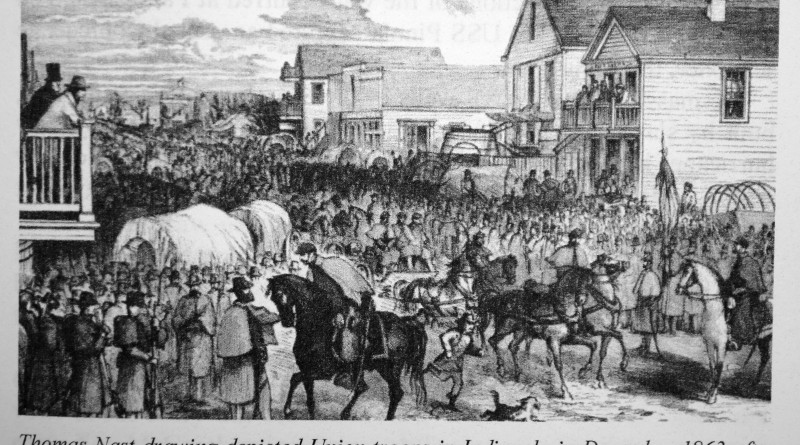 Although the Reconstruction era in America took place nearly 153 years ago, it still remains a significant part of history. The known antebellum South had little in common with antebellum Nueces County and the Coastal Bend area remained nearly undeveloped until after the Civil War.

When Corpus Christi was settled in the 1830s it became one of the larger cities in the region, at the time with 175 residents. By 1860 the city held 2,906 people, and the economy depended on open-range grazing of cattle and sheep, according to Randolph B. Campbell’s article “Reconstruction in Nueces County.”

By 1861, Texas responded to the election of Abraham Lincoln by joining the Confederacy, just a few weeks before the first shots were fired at Fort Sumter. Though there were few slaves in Texas compared with the old South, Texas still favored succession. Nueces County favored succession by a vote of 142 to 42.

Texas men joined the war effort, becoming Confederate soldiers; however, only a few joined. Men mostly defended the coastline, some guarding against possible Union attacks, and others pushing into New Mexico Territory. Because of the population in Nueces County, most men stayed to defend against Union attacks.

Women stepped in to do the work done formerly by men. They would take care of their families alone and if their husbands died in war, they’d continue to play the known male role.

Corpus Christi suffered more military action than most of Texas. Residents had time to evacuate before Union attacks in 1862-63.

The Civil War brought shortages of many kinds including damaged transportation networks, northern imports of goods ceased, and Union blockades made it difficult for cotton growers to export their crops. However, even through the shortages, Texas was a safer ground and many refugees sheltered in Texas, often bringing slaves with them, which led to an increase of slaves.

The different political beliefs, whether that be the support of Confederates or Unionists, led to violence. Many German immigrants and Mexican Texans opposed succession and in 1862, three dozen Union supporters, most of whom were German Texans, were massacred near the Nueces River while trying to flee to Mexico.

When the war ended in 1865, Union forces reached Texas for the emancipation of slaves, leading to the beginning of Reconstruction. Under Lincoln’s 10 percent plan, residents had to pledge their loyalty to the United States, abolish slavery, and declare that secession from the union was illegal.

Former slaves, more hopeful of the future after the Civil War, had limited opportunities for building their lives. In Nueces County, County Judge John Dix and other Unionists were concerned for the lives of former slaves. Many freedmen were denied pay and were still treated as slaves.

On top of that, most Texan voters did not want to ratify the 13 and 14th Amendment, which was the enactment of the abolishment of slavery and citizenship of African Americans. Most Confederate states enacted restrictions to prevent the freedom of African-Americans.

During Reconstruction, Nueces County was less violent compared with other areas in Texas that established Ku Klux Klan (KKK) chapters and tried to diminish those who fought for their freedom.

Dix, also a Freedmen’s Bureau agent, established a school in his Corpus Christi hotel for former slaves. His actions of helping African-Americans were viewed as appalling to many of the Confederate white population in Nueces County, as they still viewed African-Americans as inhuman.

The history of reconstructing the South did give freedom to former slaves, but it did not grant the feel of emancipation to freedmen. With restrictions such as black codes that segregated and often constructed African-Americans to hide behind a veil, played a key part to the South restoring white rule, as once was during antebellum South.

Fearing a strong central government, Texas approved the state constitution of 1876, the year ending Reconstruction, which severely limits the power of the governor and still rules today.

With years to come after the era, many would still be discriminated upon after the country restored itself. Even as more minority immigrants moved to Texas for economic expansion, restrictions and hardships in the state continued.