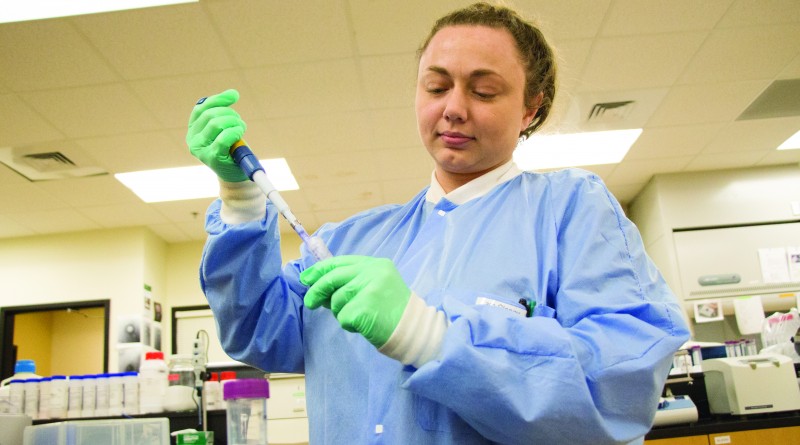 Clancy competes against over 40 community colleges

For biotechnology major Tara Clancy, winning first place in the Community College Undergraduate Research Initiative’s Fall Colloquium was not only an “unreal” experience, but a potential introduction to what could revolutionize the world of science and bacteria.

The focus of Clancy’s research took place during her 10-week summer internship with the college that allowed her to dedicate time to her research while working along Daiyuan Zhang, associate professor of biotechnology, and John Hatherill, professor of biology, in the Natural Sciences Department.

The CCURI Fall Colloquium, which took place in Austin, had Clancy’s research reviewed before surprising her at the event. The national event hosts over 40 community colleges to encourage students who are interested in the sciences to have hands-on experience with their own research before facing it on a professional level.

The original sample used to begin Clancy’s research on bacteriophage (viruses that attack a specific bacteria such E. coli) came from a sea turtle rehab facility in Port Aransas, which ties into Clancy’s prospective career path of choice, marine biology. The next step for Clancy’s successful research is to aim it toward helping endangered sea turtles.

“I don’t know about patenting, that’s not why I’m doing it,” Clancy said. “For me, it’s more of … If I can come up with something that’s going to help save a turtle somewhere, take it! If it helps save at least one turtle, I’m all for it!”

With her time at Del Mar soon coming to an end, Clancy looks forward to applying for the National Oceanic and Atmospheric Administration) internship program, while having applied to multiple four-year schools on the East Coast based on her major.