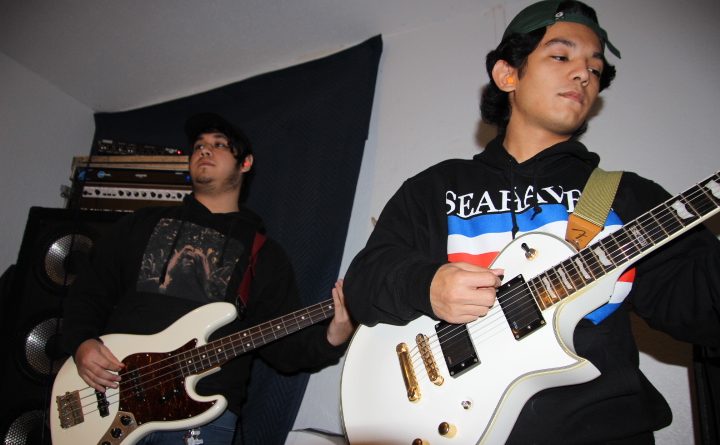 In just four years, local band Madrigal has gone from playing in Corpus Christi garages to one of the biggest music festivals in the country.

The alternative rock group, made up of four longtime friends, three of them Del Mar College students, will take the stage at Austin’s South by Southwest Music Festival in March, with the dates to be determined.

“Two years ago, I went to South by (Southwest) and I really wanted Madrigal to play, and this year we are playing,” said Tomas Gonzalez, a music education major.

Gonzalez, along with Dustin Barron, Gavin Solis and Jeremiah Hernandez, formed Madrigal in 2013 during a friendly jam session. The band has since played several venues in Corpus Christi including Hybrid Records, Disc-Go-Round, The NASA, Boozer’s and Artwalk.

Since compiling several original songs, the band has also performed throughout the Valley, as well as San Antonio and Austin, but South by Southwest will be their biggest show yet.

Band members have been able to interchange roles as all are skilled at guitar but also versatile in what instruments they can play.

“Most of the time now, since all of us play guitar and all of us sing, we all write our own songs on our own,” said Solis, a sound recording technology major. “And we come together like, ‘Hey, listen to this! Should this be on Madrigal?’”

Some of the band’s original songs include “Lakes” and “Carriers.”

The group challenges the blurred lines between being friends and being bandmates, which makes for an easy chemistry within the group. That’s important because from writing music to lining up shows, they do everything themselves.

“We’re DIY, so we kind of record ourselves and book our own shows, and buy our own shirts and stuff,” Gonzalez said. “So, we don’t go through anyone to do things like that.”

You can listen to one of Madrigal’s demos at madrigaltx.bandcamp.com. The band has not released their official dates for SXSW.