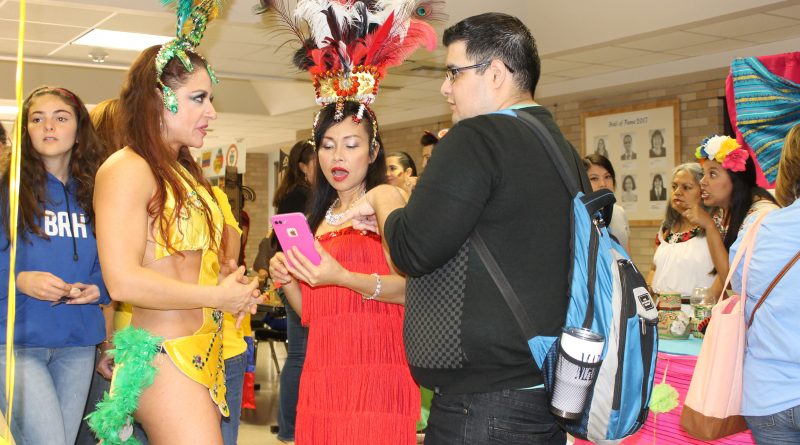 Students representing cultures from across the globe came together in the Harvin Center for the annual International Day of Celebration.

Some of the many countries represented were Greece, Taiwan, Brazil and the Ukraine. The March 28 event included informational tables displaying the variety of foods, traditions and artifacts specific to each country’s culture.

The Harvin Center was loud and lively with drum sounds produced by those representing Brazil. Also included in the event was a traditional Brazilian martial arts dance called Capoeira and a Samba.

Many of the tables offered free food and sweets to passing students, such as the table for Cozumel, Mexico, which gave out Cachedas, a Mexican lollipop candy.

Maria Lignou, from the small Greek island of Karpathos located in the southeastern Aegean Sea, said she lived in Karpathos for 25 years before moving to the United States a year and a half ago for personal family reasons.

Lignou displayed photos of the Greek Parthenon, a historical religious temple in Athens, the capital of Greece, and the Syntagma Square, the central town gathering place in the heart of Athens. Lignou said that out of all the foods her country has to offer, her favorites were Baklava and especially Greek Gyros.

“My home island of Karpathos is very small, but I put all the traditions on my display because it’s important that we keep these traditions; it’s very hard,” Lignou said. “Among the Greek traditions, dance and the songs we sing mean the most to me.”

The ESOL program, which organized the event, offers classes to students born in other countries who are looking to improve their spoken, written and grammatical English.