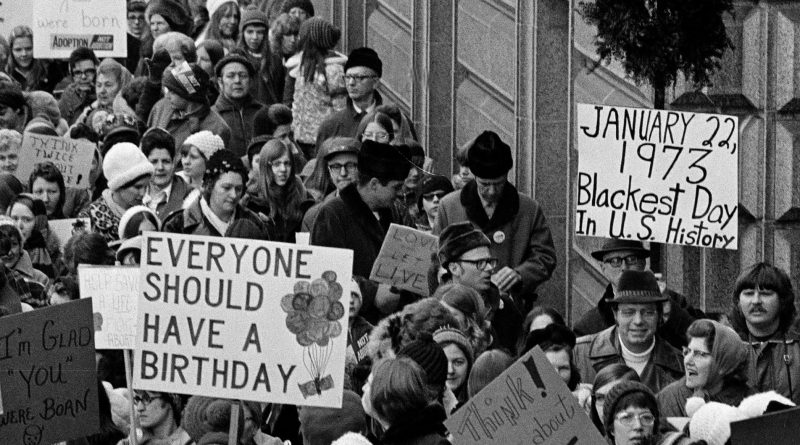 An estimated 5,000 people march around the Minnesota Capitol building protesting the U.S. Supreme Court's Roe v. Wade decision, ruling against state laws that criminalize abortion on Jan. 22, 1973, when the Supreme Court legalized abortion with a 7-2 vote.

In the years since the 1973 Roe v. Wade Supreme Court decision, which confirmed the “right to privacy” and cleared way for a woman’s right to choose for a legal abortion, the issue has still been subject to much debate. There has been much backlash from the division of anti-abortion and pro-abortion rights supporters, especially in Texas, where Roe v. Wade originated.

The 7-2 Supreme Court decision states the legality of a woman’s right to have an abortion under the 14th Amendment of the Constitution. Texas resident Norma McCorvey, better known as Jane Roe in the case, was seeking an abortion. Henry Wade, the district attorney of Dallas County from 1951 to 1987, enforced a Texas law prohibiting abortions, unless to save the life of a pregnant mother.

The ruling of Roe v. Wade allows for abortions during the entire pregnancy, but state’s interests can regulate abortion during the second and third trimesters. The decision affected 46 states; Alaska, New York, Hawaii and Washington state had already legalized abortion by 1970.

The generations after Roe v. Wade, more specifically in Texas, have been known to restrain women’s health services. The topic of abortion is hotly debated among many, and the movement really became more widespread during the 1960s and ’70s, when a growing movement of women and men were taking action for change in traditional control.

Some of the major restrictions in Texas since Roe v. Wade, according to the Guttmacher Institute, include:

Nearly all women must receive state-directed counseling, including information created to discourage an abortion, then wait 24 hours before the procedure can be provided. Abortion is only covered in cases of life endangerment by private insurance policies; however, individuals can buy an optional rider at an additional cost. Under the Affordable Care Act, health plans in the state’s health exchange can only cover abortion if the woman’s life is endangered.

Further restrictions include medication abortion being provided to use FDA protocol, and when managing medication abortion telemedicine is prohibited. Minors must have consent from parents before an abortion can be issued. Only in cases of life endangerment, rape and incest can there be public funding. At least 24 hours before issuing an abortion, a women must undergo an ultrasound and the provider must show and describe the image.

Lastly, an abortion can be issued 22 weeks after the woman’s last menstrual period if the woman is endangered, her physical health is severely compromised or there is a lethal fatal abnormality. The Guttmacher Institute also stated in a report this year that the “law is based on the assertion, which is not consistent with scientific evidence and has been rejected by the medical community, that a fetus can feel pain at that point in pregnancy.”

More closely home, in 2014 Corpus Christi lost its only abortion provider, the Coastal Bend Birth Control Center, due to the restriction of House Bill 2 in 2013. The bill required requires doctors who perform abortions to have nearby hospitals and clinics to meet standards for outpatient surgery.

Although the U.S. Supreme Court struck down the restrictions, the center announced it would not reopen.

The Coastal Bend Birth Control Center was the only abortion provider between the Rio Grande Valley and San Antonio. Before 2013, there were more than 40 abortion clinics in Texas and in 2016, 19 remained, according to a Caller-Times article.

The country became widely attracted to Roe’s use of privacy and what that meant, starting a redefinition. People connected privacy to personal identity, use of technology and more.

However, in 1997 Roe, aka McCorvey, started Roe No More, an anti-abortion organization dedicated to speaking out against abortion. In 2003 she tried to overturn the 1973 ruling but it was repealed.

Regardless, legal abortion gave more access to reproductive health services that provide proper services such as birth control, testing for and treatment of sexually transmitted diseases, screenings and annual checkups. Though with defunding, medical insurance coverage and other factors, women in smaller communities are left with little to no services.

As the legacy of Roe v. Wade continues, so does the debate between anti-abortion and pro-abortion rights supporters.