With spring break plans taking shape, many will be eager to hit the beach. However, if you’re looking for a less party-like atmosphere, there are several new movies opening over the break.

From action to romance, these films are ones you don’t want to miss … and they go great with popcorn and a refreshing drink.

Visionary director Ava DuVernay brings Madeleine L’Engle’s classic novel to life on the big screen. When Dr. Alex Murry (Chris Pine) disappears, his daughter Meg (Storm Reid) sets off with her classmate Calvin (Levi Miller) to try to find her father, who has been missing for five years. Guided by three astral travelers, Calvin and Meg set out on a dangerous planet that possesses every evil in the universe. The film aims to be visually stunning, and with a strong cast led by Oprah Winfrey and Reese Witherspoon it is on the track to be a movie that everyone can enjoy.

‘THE STRANGERS: PREY AT NIGHT’ (March 9)

The Strangers return once again on the big screen 10 years after the first hit film. Starring Christina Hendricks and Martin Henderson, the sequel follows a family who take a road trip to visit family and makes a stop at a secluded mobile home park. From there, they get stalked by three masked individuals and they must fight to survive. After the success of the first film and the impact it left in the horror genre, this sequel looks to be a welcome return for these masked psychopaths. 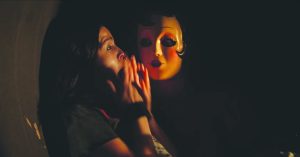 Charlize Theron, Joel Edgerton, David Oyelowo and Sharlto Copley all headline this latest action-comedy from Amazon Studios. Directed by Edgerton’s brother Nash, Oyelowo plays American businessman Harold Soyinka, who is sent to deliver a cannabis pill formula to a lab in Mexico. He soon discovers that the company has made a deal with the cartels and finds himself dead smack in the middle of it all. The film looks to be a fun ride from the trailers.

Oscar winning actress Alicia Vikander steps into the role as Lara Croft in the reboot of the franchise based on the hit video game series. Croft sets off to solve the mystery of her father’s disappearance. She discovers that his last-known destination was to a tomb on a mysterious island off the coast of Japan. The stakes get higher as an organization named Trinity, led by Mathias Vogel (Walton Goggins), sets to find the tomb and use whatever is in there for their own purposes. Vikander sets to fill in the shoes of Angelina Jolie, who previously portrayed Croft back in the early 2000s, all while making the character her own.

For those wanting a good love story, this new romance flick sets to add a unique twist to the genre. “Jurassic World” star Nick Robinson portrays Simon, a teen who is gay but hasn’t told anyone about it, including his friends and family. He soon falls for a classmate online but doesn’t know who his secret admirer is. Director Greg Berlanti, known for producing “The Flash” and “Dawson’s Creek,” makes this a film that is relatable to many people with its premise, making seeing Simon’s story all worthwhile.