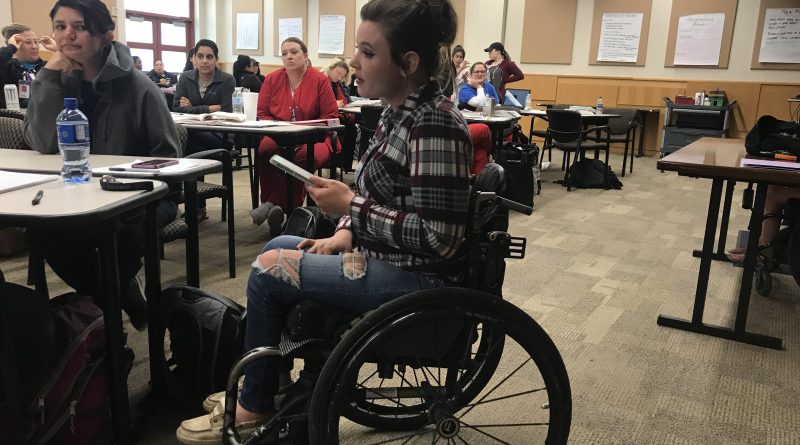 Sisters injured in car accident share their story with class

Third-year nursing students recently received more than a normal 8 a.m. lecture as professors Catherine Duggan and Floyd Green brought in guest speakers to turn the lecture into a real-life situation.

As the students ventured into the complex topic of spinal injuries, Eden and Brittany Elkins were there to lend a helping hand and describe the 2002 accident that changed their lives.

“The last thing I heard was my dad’s fiancée yelling, ‘Babe watch out!’ as the truck headed toward us,” Brittany, now 24, said at the April 16 presentation on West Campus. “After that I don’t remember anything.”

The two girls were accompanied with their dad, his fiancée and two little sisters in the car. They were traveling through Michigan when a truck veered into their lane and hit them head on.

As the truck collided with their car, the trailer attached to the truck whipped around and hit the back of the car where Eden, Brittany and their next sibling were sitting.

Their father’s fiancée did not survive because of the impact her head endured as she tried to protect their youngest sister.

Knowing this much and seeing photos of their injured state, the students were told to predict short- and long-term goals for their injuries along with procedures on how to care for them, before seeing the girls in their present state.

“The students were silent,” Green said as he showed the class pictures of the two girls in the hospital. “I think more shocked than anything.”

Not only were the students impressed by their healthy present-day state but also by all the accomplishments they have achieved so far.

“Most people see those pictures and think the girls wouldn’t survive,” Duggan said. “But they are alive, well and living their best life.”

The two girls made sure to stress the things their nurses did that helped them in their four-month recovery period in the hospital.

“The nurses are what helped us the most,” said Eden, 25. “They took the time to make our time there better.”

One of the biggest challenges that face them in their everyday lives is autonomic dysreflexia, which causes their blood pressure to rise, dizziness, sweats and pounding headaches.

The girls live together in a house where they have made a living supporting each other and trying their best to not let their injuries define them and the rest of their lives.

“It’s an adventure,” Brittany said. “We might make a mess behind us but we do it.”

Eden expressed that their conditions are difficult and as a nurse “it’s hard to give that news to somebody” but to just to have patience.