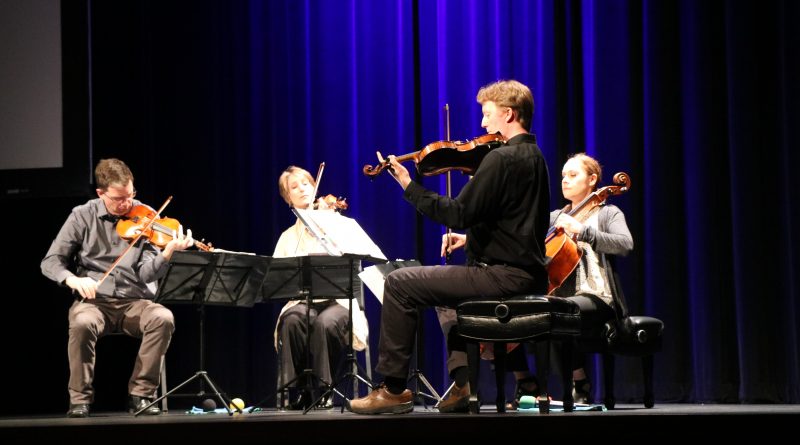 Crossroads event gets audience to focus on preservation of planet

Just how much do we know about our island planet, and ourselves? Not as much as we may have thought.

The Crossroads project, a visual and auditory environmental experience, performed at the Richardson Performance Hall at Del Mar College on April 24, just three days after Earth Day. Reviewed in the past by the Boston Globe and The New York Times, the presentation revealed shocking statistics in the silent auditorium.

The visual aid to climate physicist Robert Davies’ prose speech included minimalist infographics with the numbers to prove it: the seabird population going down 70 perent since the ’50s, deforestation increasing 50 percent since the ’70s, 6,000 plastic bags being used by humans every five seconds, etc.

The 75-minute performance included mixed intervals of Davies speaking and iminate violin and cello by the Fry String Quartet, composed of violinists Robert Waters and Rebecca McFaul, violist Bradley Ottesen, and cellist Anne Francis Bayless, who filled the room as eco-art and photography was projected behind them.

Presenter and former NASA collaborator Davies spoke about biodiversity as a “community of overlapping guilts,” as well as different points on water, plastic, climate change, etc.

“Whole ecosystems are able to collapse,” he mentioned, “as they have five times before,” all triggered by an chaotic change in climate.

During the talk-back session after the performance, Davies and the string quartet sat at the end of the stage to engage with the audience as a microphone was passed around for questions and comments.

“Professor, you left me on nirvana; you wanted me to leave on a happy note,” said Maclovio Perez, broadcast meteorologist for KRIS 6 News, during his inquiry to the team on the grave seriousness on the political connotation fossil fuels and those who encourage the use.

Davies replied with saying that although calling out the “bad guys” is more than imperative, he wanted to leave viewers with a “resolved note” and the premise that change is possible.

“What I’m hoping this performance does is make us think: What are we going to do?” he said.

To learn more about the Crossroads project and their future performances, visit www.thecrossroadsproject.org.