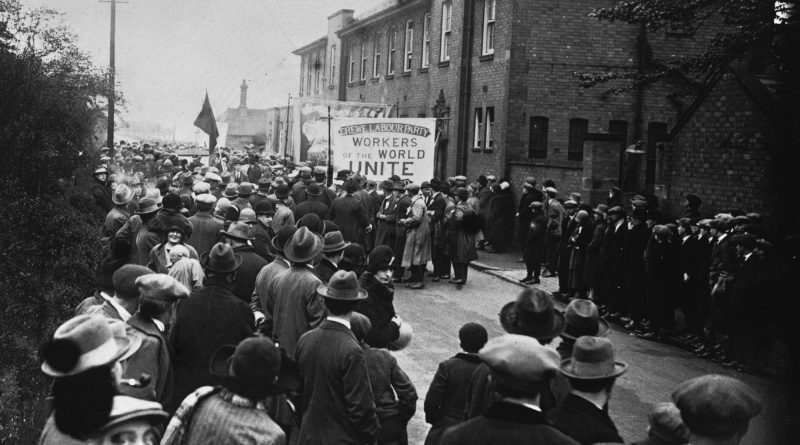 In 1926, a General Strike was called by the Trades Union Congress in support of the coal miners' stand against enforced pay-cuts. It lasted only nine days in May but brought large parts of Britain to a standstill, including London where there were armoured cars on Oxford Street. In this audio extract, Jack Gaster (born 1907) recalls the impact of the strike on the lives of ordinary people. This photograph taken on 10 May 1926 shows workers demonstrating and carrying banners as they march through the street during the General Strike.

In the 1930s, Corpus Christi was at the forefront of labor strikes, organizing protests and walkouts against unfair working conditions.

The city’s dock workers, on Sept. 20, 1935, went on strike in support of strikes being held in othe r port cities of the American south such as New Orleans, with the workers planning to get recognition from the International Longshoremen Association (ILA). The strikers demanded a coastwide agreement and control over hiring.

In the early stages of the campaign, negotiations occurred. The Texas Steamship Men, a striking faction, made a final offer to strikers but the strikers quickly dismissed it as insufficient.

Strikers felt there was a lack of communication throughout the ILA-charted unions. While only shortly after the strikes began, shipping companies brought in non-union, or “scab,” workers to replace striking dock workers.

By October 1935, the ILA established the first organized walkout of all ports on the Gulf of Mexico. Nearly 7,500 workers at ports from Pensacola to Corpus Christi participated.

In Corpus Christi, the union strikes got increasingly violent. A man was allegedly killed by a picketer, who is said to have beat him over the head with a brick. Another picketer was charged with attempted murder after shooting a non-union worker.

The violence caused Gov. James Allred to call for the Texas Rangers to enter Corpus Christi and take special measures. The Rangers used racial slurs and insults against the strikers based on socioeconomic status, which only worsened the ill-will between strikers and law enforcement, as well as union and non-union workers.

Gilbert Mers, a past longshoremen for Corpus Christi in 1935 and member of the ILA, wrote in his book, “Working the Waterfront: the Ups and Downs of a Rebel Longshoremen,” about the abuse of the Rangers. “The pickets, thus held at gunpoint by the Rangers, watched the provisions for the scabs pass into the port,” Mers wrote.

The relationships continued to worsen, which led to Corpus Christi Sheriff William Shelly to deputize special police officers to protect the safety of the longshoremen against the Rangers. Shelly vowed to interfere in the strike when the law was completely broken; however, protesters were hesitant to call police when their lives were threatened.

MInorities, such as Latinos and African-Americans, engaged in the Corpus Christi strikes more so than other longshoremen strikes in the ’30s. It is said, according to the Swarthmore College database on the case of the Corpus Christi longshoremen strikes, that strikers were segregated, with dock workers who could take leadership roles within their own faction rather than if in an integrated environment.

Gabriel Cruz, a spokesman for the warehousemen, brought the minorities’ attention to the committee, which led to the warehousemen being welcomed in spaces where strikers’ supplies were accessible.

The strike committee began negotiations with independent shipping companies in Houston in December 1935. The strikers found that shipping companies were more compliant to their needs “if negotiations over western ports included a company of strikebreakers called the Houston Buffaloes, being contracted,” according to the Swarthmore College document. However, the longshoremen did not accept the Buffaloes due to them working outside the union and did not participate in the strike, which led the longshoremen to believe they should not be charted by the ILA.

By Dec. 12, terms had been reached with shipping companies. Wages were not improved and a coastwide agreement was not accomplished, although the workers stressed the ILA’s presence and importance through the eastern ports.

This was one of the many union strikes beginning in 1929 with the economic downturn of the Great Depression.