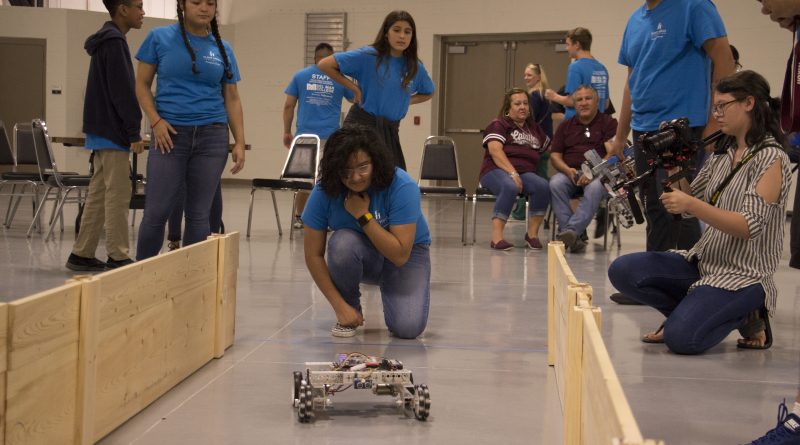 As Henry Stanley and Teddy Trevino watched their robot car approach the finish line, they had faith their last-minute programming changes would keep in on course.

The pair, along with 50 other middle and high school students from the Coastal Bend, attended the seven-week Corpus Christi Prefreshman Engineering Program summer camp at Del Mar College

“I was very proud of it because even though it didn’t make it the first or second attempts, it made it at the third attempt,” said Henry, a Flour Bluff student who hopes to go into a STEM-related career. “Me and Teddy are both very proud.”

Students began the class by designing and building their robots, then ensuring the motors worked correctly and placing sensors. Campers spent much of the remaining time programming their robots to navigate the course, which required the robots to make turns and find the finish line on their own.

James Shollenberger, who has been in charge of the Prefreshman Engineering Program for 10 years, said the program gives campers a foundation to STEM programs, engineering and programming.

“First-year students learn introduction to engineering, which is the bridge building and robotic cars. Second year does physics with experiments, and third year does technical writing and presentation,” Shollenberger said.

For freshman camper Sachi Sooda, the physics class was difficult because it was new to her.

“It has been rigorous. It is pretty hard, but we are pretty smart kids so we can do it,” Sooda said.

While some campers built robots, others built bridges to be strength tested and cardboard homes to learn architectural skills. Some students had planned to build catapults to launch golf balls, but the 3-D printer malfunctioned.

“We saw the NPR station and I actually listen to that radio station so it was really cool,” Sooda said.

Henry Stanley’s mother, Anita Stanley, said she was impressed with the camp.

“I look through his notebook every week and there is math and engineering stuff that most kids his age are not exposed to,” Stanley said. “They are getting it at an age when most kids don’t.”

Shollenberger encouraged anyone interested in STEM fields to attend the annual summer camp, which is free for participants because of funds given by Flint Hills Resources.

“There is no better way to decide that if this is something they might like to do than to come experience it firsthand,” Shollenberger said.

For more information about the camp, contact Shollenberger at jshollen@delmar.edu.