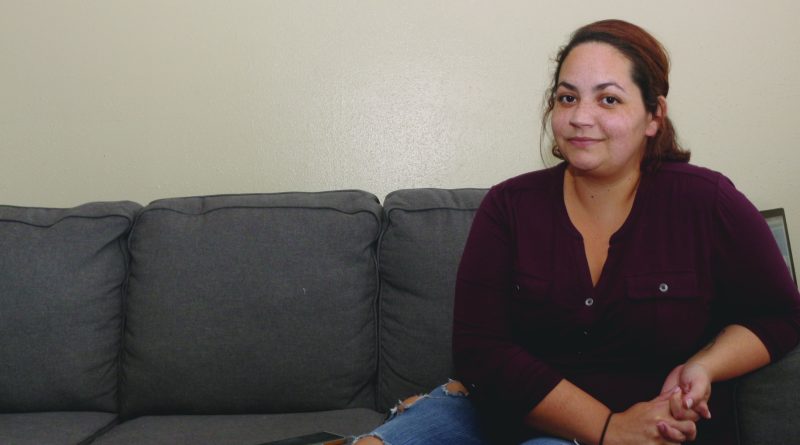 Former Del Mar student Natalie Murphy is no stranger to hardships, which is how she knew she could bounce back from Hurricane Harvey.

“You know it can happen, but it’s one of those things that you don’t think is ever going to happen to you,” said Murphy, who lived in Aransas Pass with her husband and three sons when the storm struck.

Murphy wanted to leave when she heard Harvey had become a Category 1 hurricane, but her husband did not want to. The next morning they checked the weather and found out Harvey had quickly turned into a Category 3 storm.

“He said we had to leave today and with that we started to board up the house and pack,” Murphy said. “We drove four hours to his aunt’s in West Texas.”

Murphy and her husband returned a week later. Their home had major flood damage and they lost nearly everything.

“It flooded, and one of the things that I never knew happened was animals from outside come into the house to escape the storm,” Murphy said. “There were dead mice in our house that got into the kids’ tubs full of toys. You add the gross flood water and the dead mice; it was the grossest smell you can possibly fathom.”

Murphy and her family had to abandon their home of 6 years to live in a hotel in New Braunfels for several weeks.

“In September last year, we decided we needed to find a place. We just sort of ended up in Corpus,” former Foghorn Newspaper Editor Murphy said.

Family and friends donated furniture and toys for her children. Local organizations provided food and water. Murphy received federal help, but not as much as she expected.

“They valued everything at garage-sale price…There wasn’t much for us to do to fight it,” Murphy said.

While she did receive other assistance including rent and emergency food stamps, Murphy said she saw more help from random strangers across the country than the government.

“On our way down from New Braunfels, there would be these convoys of people with signs on their windows like, ‘We’re from Michigan going to help,’” Murphy said. “I think a lot of the problem was everyone shifted their focus to Houston and we got forgotten.

“Not to minimize what happened in Houston because it was scary and horrible to watch, but it was also horrible to watch, four hours away from your home, and see a storm churn on a radar and think, ‘There’s people that I know that stayed. Our home is there, and we don’t know what we’re going back to. We don’t know if our whole town will be gone.’ I think that was one of the worst parts: watching how little attention was paid to our area.”

“When everyone was sharing their timeline memories on Facebook, it just made me sick. Like a kick to the gut. Just seeing pictures of when it actually hit; I don’t think I realized how much it affected me.”

Harvey was just the latest in a string of tragedies, including the loss of her son to cancer less than three years before.

“We had all this stuff just piling up: our son’s passing, the flood from May 2016, Hurricane Harvey, and then my husband’s father passed away from cancer this past October,” Murphy said. “When you move, you’re in a new space but you have all your stuff. When you buy new stuff, you’re still in your space. But when something like this happens, you’re in a new place and it’s none of your stuff and it’s very disoriented almost. For a long time, we were just going through the motions and not taking any steps to move forward…You feel like you’re standing still and the whole world is just cruising by.”

Murphy said she can’t help but keep an eye on the gulf this storm season.

Murphy’s focus is on restoring a sense of normalcy to her kids’ lives.

“All of this stuff that you think will never happen to you happens, and you’re like, ‘OK, so what do we do now to pick up and keep going?’ I feel like that’s what we’ve done our best at doing, and we’ve been successful with that because of the people in our lives,” Murphy said.

Nearly a year since moving into a new home, that normalcy is returning.

“The other night my husband told me that we need to put pictures on our walls because they’re just bare. He said we should make this place feel like a home.”