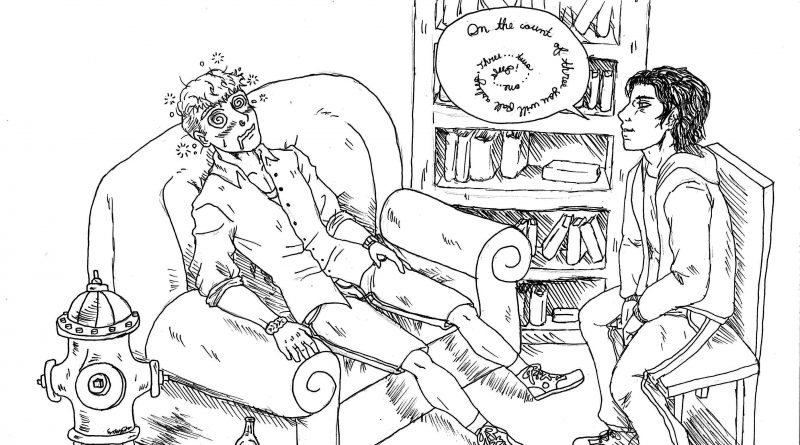 As I lay on a stranger’s white leather couch, preparing to be hypnotized by a man I met less than two hours earlier, I couldn’t help but wonder how I ended up in this situation.

It all started when I was speaking to a friend who loves to travel but is always broke. Inspired by this I had what some would call a dumb idea. What if I could spend an entire weekend in another city on a budget of just $60? After little to no thought I decided to vist San Antonio. So for all you penny-pinching cheapskates out there, this story is for you.

I knew right away this wasn’t going to be a stay at the Marriott, but I went into it with an otherwise open mind. After a few minutes of searching for cheap places to stay I stumbled upon a website called couchingsurfing.com. Couch Surfing is a free site where people can offer up their couch for other members to stay. As sketchy as this sounds I was determined to make it happen. After about 10 minutes of searching the site for a host in San Antonio I found one with all positive reviews. I booked his couch for the next Friday night.

My eyes close and I become unable to move my limbs. Fear takes over and I pray that I won’t end up barking like a dog or worse. The next 10 minutes feel like hours. My memory while I was in this deep trance was hazy, but I remember being asked questions about who I truly was and what I felt was stopping me from achieving my dreams. I remember answering these questions without fully thinking about them.

“When I snap my fingers you will awaken.”

My eyes open and I bolt straight up. It felt as if I had just came out of a deep coma yet I also had a great sense of relief as well.

Feeling oddly hungry and self-complete after I had just been hypnotized, I asked my host where would be the best cheap place to eat. He quickly recommend a local chain restaurant open 24 hours called Chacho’s with a free all-you-can-eat salsa bar. Not wanting to be to much of a cheapskate I bought a large fountain drink for around two bucks and ate as much free salsa and chips as I could. Now full and still a little dazy I headed back to my host’s house and passed out on the same white leather couch I had just been hypnotized on.

The next morning I woke up early — I had just survived the first night. After bidding my host goodbye and stopping at a gas station to get a great breakfast of packaged donuts and coffee, I headed on over to my first stop of the day, Barney Smith’s Toilet Seat Museum. This museum is not your typical museum — its in suburban San Antonio in a 97-year-old man’s garage. Over the years he has collected and decorated over 1,000 toilet seats and has a unique and interesting story for every single one. After spending the morning talking and listening to stories about toilet seats, I was starting to get hungry so I headed back to my car and brought out my very cheap lunch of spray cheese, crackers and chips. After eating way too much spray cheese and now worried about my health I decided I needed to visit somewhere peaceful, so I headed over to the free Japanese tea gardens.

At this point in the day it was getting to be late so I decided to head over to where I would be staying my final night. I wanted to try out tent camping to see if this was a better option than sleeping on a random man’s couch. For this I found another website called Hipcamping.com. I found a campground called AI’s Hideaway not far from San Antonio. The cheapest site they had was primitive campground for $20 a night.

After about an hour’s drive and a couple of wrong turns on dusty dirt roads I found Al’s Hideaway. I pulled up to the pavilion and was shown to my campsite. I spent the next hour and a half attempting to set up my tent and eventually got it, I think. I spent the next few hours hiking and floating in the pool. After darkness fell and the stars filled the sky I got hungry, so I pulled out my last meal I had brought with me — every college student’s favorite, Ramen Noodles.

While cooking my noodles I started talking to some of the guests and the owner, Gordon Cook. After telling them the story I was working on and after a few rounds of laughter, to my surprise, Cook made me a deal that If I took photos of his campsites he would give me free pizza and, if I would have been 21, a few beers. Tired of cheap food, I gladly accepted the task and ate the best kind of pizza ever — the free kind.

The next morning I packed my tent and my bags and bid my farewells to the other guests and Cook. On the way I put $10 in the tip jar and headed out. I stopped at a gas station on the way and put all I had left into gas to get home and hoped it was enough.

ADVENTURE FAR FROM OVER

As I rode down the highway heading home I couldn’t help but think, while this was by no means a stay at the Marriott, in a way, this was better. I had met some incredible people and seen some amazing things and I did all this on less than $60.

Right as these thoughts where crossing my mind I heard a loud CRASH and felt my car begin to vibrate violently. I quickly pulled over to discover both my back tires had blown out. After about two minutes of cursing about how close I was to making it back home on budget I called a tow truck. After a few hours chilling on the side of the highway, I saw my tow truck arrive.

As I rode off into the sunset with yet another stranger, I couldn’t help but smile — what a perfect way to end the trip.

2 thoughts on “Sleeping with Strangers”