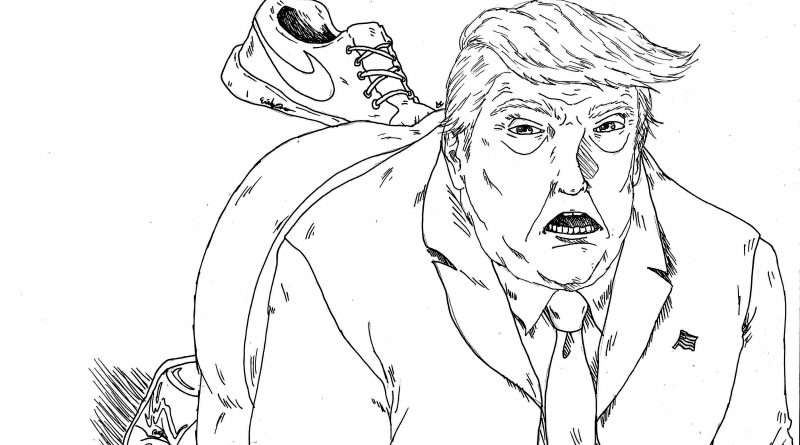 For the past 30 years, Nike has worked to cement its slogan, “Just Do It,” into American culture. It represents itslef with the best of the best in sports. Professional athletes such as tennis player Serena Williams and New York Giants wide receiver Odell Beckham Jr. can be seen representing Nike in countless campaigns. To celebrate 30 years of business, Nike released an ad campaign with NFL quarterback Colin Kaepernick with the caption, “Believe in something. Even if it means sacrificing everything,” placed across Kaepernick’s face.

The ad stirred many emotions as loyal customers of the brand could then be seen posting videos burning their Nike products. Some took to Twitter to post pictures of themselves cutting the brand’s logo off of their attire. People were outraged seeing that such a large corporation would stand behind the values and morals of a man who kneels during the National Anthem.

Countless tweets and videos are being circulated with hate toward Nike and it only begs the question, is it worth it? Should companies take a stance such as the one Nike took?

Kaepernick kneels for the justice of those being treated unfairly — for those who experience racial injustice of any form. Throughout history you see athletes who were treated unjustly such as professional baseball player Jackie Robinson or American track and field athlete Jesse Owens, men of the times who had to endure the slurs and snares of the cruel world around them and exceed expectations to become something.

It seems there is an athlete for every generation that has a voice, a message that could no better be displayed than on their own platform. Kaepernick kneels for the victims of police brutality with high hopes of justice.

For Nike to sign Kaepernick simply means it supports the idea, which shouldn’t come as a surprise to many. As said before, Nike prides itself on who it brands itself with. Nike deals with athletes firsthand and looks past the talent and into the passion that the athlete has for his or her sport. It exhibits people for their hard work and morals that help them stand out.

Nike’s mission statement is “to bring inspiration and innovation to every athlete.” As a dominating athletic brand Nike has made a rather tactical business move. The brand did not just look at the athlete but looked at the athlete’s moral code and personal conduct. Nike didn’t just look at the situation from a popularity standpoint. This time rather than standing beside popularity among the sports population, it rallied behind a strong moral belief.

With any company with a strong buyer influence such as Nike taking a chance on someone is always risky, especially when that person has gained a negative backlash such as Kaepernick. However, such a decision isn’t necessarily a risky move if that person had a strong belief behind them like Kaepernick did. Nike rallied behind a cause that countless others have been trying to bring awareness to. However, no decision is without its downsides, as seen in the protests on social media.

The main point of the campaign is to showcase how athletes overcome obstacles throughout their lives. For example, the professional tennis player Serena Williams ad said: “Girls from Compton dont play tennis. They own it.”

With such a tech-savvy generation, major corporations can take their message to multiple audiences in mere seconds. Even more important, when people buy something, they’re not just looking at the popularity of the item but also who personally stands behind it. For example some cosmetic consumers won’t buy a certain item if a popular makeup influencer has a negative opinion of it. When someone is buying anything, especially if it’s an expensive purchase, they’ll most likely want the best bang for their buck.
With an expensive sports brand such as Nike, it has not only attached a famous face to its brand but it has also attached a cause as well. In a generation that is constantly rallying behind change, it is important to know who or what you’re siding behind. Nike made a calculated money move and only time will tell if the decision was truly worth the outcome.

19 thoughts on “Taking a stance Nike just did it”