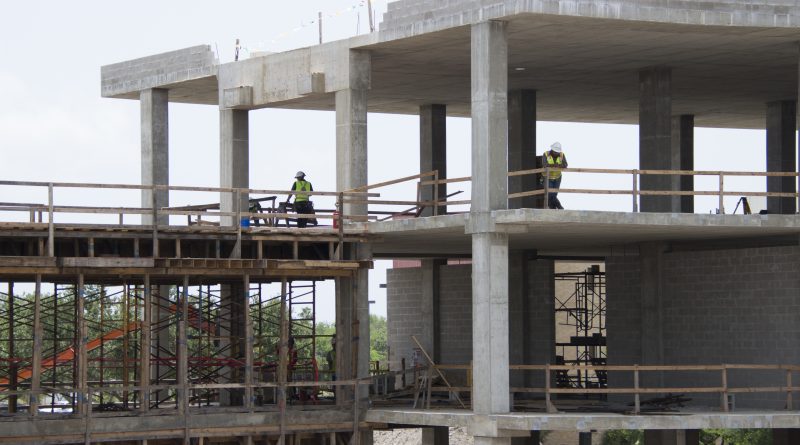 Despite Hurricane Harvey, snow and heavy rains, completion of the General Academic/Music Phase 2 construction project is still set to open in August 2019 on East Campus, according to August Alfonso, chief IT officer and vice president of Facilities Operations.

The $46 million project that started in summer 2017, funded by the general obligation bond from the voters in 2014, will include additional general academic classrooms and a second music building. It will be the biggest project in Del Mar College history, up until the south campus is built.

With Corpus Christi being in the path of Hurricane Harvey in 2017, it didn’t seem to take too much of a toll on the new Del Mar additions.

“Things are better than OK but we will begin to see some effect of the weather,” said Del Mar College President Mark Escamilla. “All things considered, I think we’re doing well with the construction.”

The construction on East Campus is one of several such projects ongoing college-wide. Additions to West Campus and the new Southside campus are also in the works, with funding from the 2014 bond and a 2016 bond.

Escamilla said he thinks Anzaldua Plaza will be a popular place for all students and faculty.

“First and foremost, what we think about is the student experience while they are physically sitting or standing in the classroom,” Escamilla said. “That’s the core of why we’re building these things.”

Construction of the Emerging Technology and the Workforce Development Project on the West Ccampus has been delayed due to weather, but completion of the Southside campus is scheduled for fall 2021, with open enrollment between then and spring 2022.