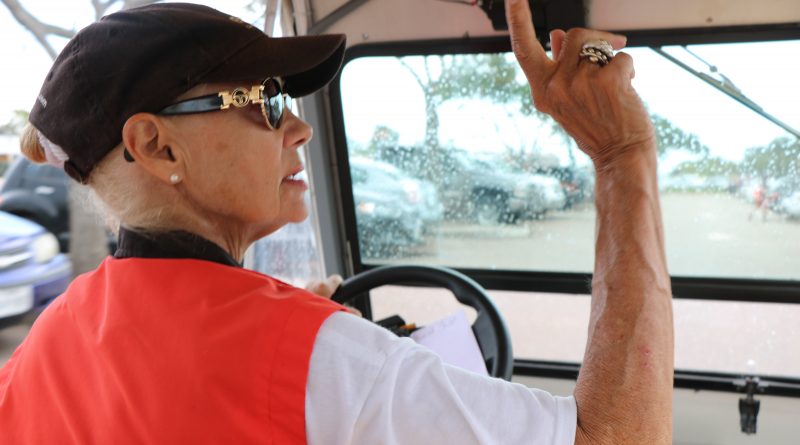 A campus shuttle driver calls out to students walking in the rain.

With construction occupying the center of East Campus, Del Mar College launched campus shuttles to help students get around campus.

Mary Jaubert is a shuttle driver and said she gives rides to about 60 or 70 students a day during a normal eight-hour shift.

“You have some that are regulars and it’s almost like I know where they need to go,” Jaubert said. “Sometimes the kids don’t see us, but that’s why we are running two shuttles and are trying to be visible.”

“The campus carts are there to provide a convenient way for faculty, staff, students and visitors of campus to get around during the process of construction,” Knioum said.

Jaubert said she is willing to go the extra mile when it comes to picking up groups of people.

Leah Johnston, 18, is a public relations major who usually walks across campus. She said she knows about the shuttle system but doesn’t ride frequently.

“A lot of people don’t know about them, or it’s difficult to find one,” Johnston said about why others might not ride the shuttles.

Student Karla Mata had her own theories.

“Maybe they are shy, you know, some people just want to walk themselves,” Mata said. “Maybe they want to burn some extra calories or something. But this system is nice, I used to walk across campus every day.”

Jaubert said many students or faculty may not know about or just don’t use the service.

“A lot of students are very surprised. I ask if they need a ride and they seemed shocked and say they do, that’s when I tell them that’s what we’re here for.”

Jaubert said she has seen some students get the campus shuttles and maintenance golf carts confused.

Campus shuttles are a service anyone can use.

“They can stop us anywhere,” she said. “The campus have these little Viking Stops, but if I see a student and they wave they are getting a ride. They do not have to be sitting there waiting for me.”