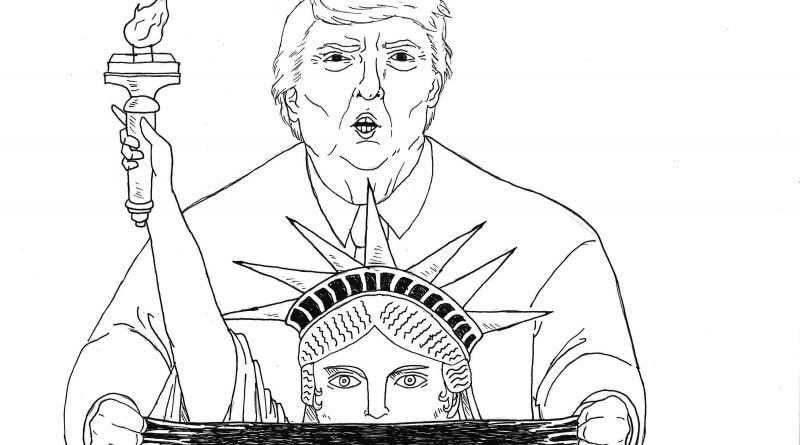 In recent years the world has taken the art of newspapers and journalism and evolutionized it. The rapid decline of the newspaper industry has paved an upward path for a new type of news and media platform.

Although the news/media outlet range has become wider, one thing stays the same and that is the journalism. The role of the reporter and of the press never changes, but only gets perfected.

President Donald Trump has kept Americans out of the loop concerning many important topics. The press continues to ask simple and fair questions that the public lawfully has the right to know or just clarification of meaning to words said by Trump, and he refuses to answer.

Trump has been drawn into a case where CNN is suing him and The White House after Trump was accused of violating CNN journalist Jim Acosta’s First Amendment rights of freedom of the press along with the Fifth Amendment right to due process.

Acosta, CNN’s chief White House correspondent, attended a formal news conference at the White House and was chosen by Trump to ask a question.

Acosta asked a question that Trump did not desire to answer. Acosta kept persisting and begging the question to which the president made comments saying Acosta is a bad journalist and should not hold the position he does at CNN.

After the conference was over and Acosta tried to re-enter the White House, he was denied access because his hard pass (automatic access into the White House) had been taken away.

White House officials are saying that the actions of Acosta — begging the question then refusing to give up the microphone when prompted to do so — are unprofessional and depriving to other reporters who had questions.

Since this story broke, the question then arises: What is the role of the press? Is Acosta or any journalist in the wrong for stressing a question of high demand by the public to a public official?

The role of any reporter is to get the news in the most precise way so that they can then relay it to the audience.

Reporters get the answers that the public can’t directly ask.

There are many topics that Trump has refused to talk about that should already be public knowledge such as whether Russia’s “involvement” in the election can or can’t be credited to the actions of Trump and his children.

Is the press in the wrong for asking questions about topics that should already be told to us without asking?

The role of the press in the eyes of Trump and White House officials is to take the truth and bend it so that the people of power look bad, or fake news. What scares Trump and makes him depict media as fake news is the vague truth behind all the bad reports said on behalf of his actions.

Journalists work to get the truth to the audience. The role of the media and a journalist is to understand ideas and concepts to educate the public on a deeper level than just hearing the surface.