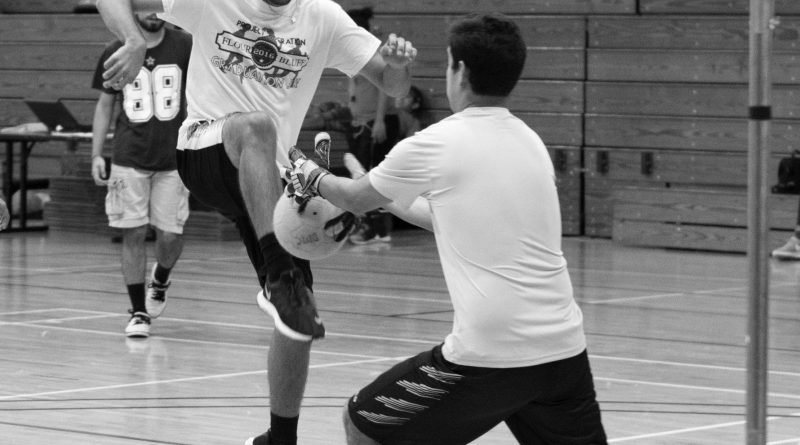 Carter Wiggins attempts to kick the ball just before the goalie can grab it.

Soccer players kick it in the gym during 4-day tournament

Many students who do not usually compete in intramurals stopped by the gym to take part in the four-day 4-on-4 indoor soccer tournament.

Two goal posts were set up in the gym as teams did all that they could to rack up more points than their opponents.

Most of the intramurals events are male dominant but that did not stop female Viking Amor Flores from joining the boys on the court.

“Soccer is the sport I play. I don’t care who it’s with,” Flores said.

Although students were constantly making attempts for the goal, one play stood out from the rest to business major Michael Lopez.

“We had possession of the ball and we passed it back and forth between the four of us all the way down avoiding the defenders, then it was just me and my teammate Carter,” Lopez said. “I had the ball and faked a shot to get the goalie to commit to it and passed it to Carter where he had on open shot for the score.”

Getting a goalie to commit is a difficult feat especially when they are as focused as technology major and goalie Alejandro Robles, who was not making it easy for them.

“My job is to defend the ball, make sure no one gets long shots in, and just guard everything around me,” Robles said.