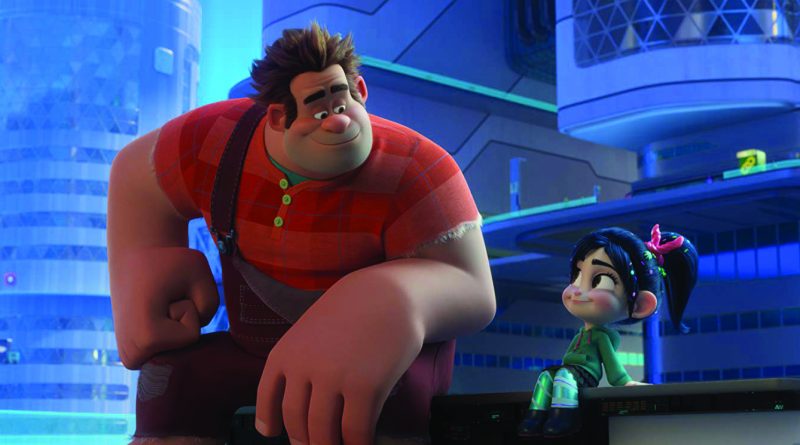 Movie offers unique take on the internet and insecurity

The movie, with returning voice-actors John C. Reilly and Sarah Silverman, starts off with Silverman’s character, Vanellope, having her game unplugged because a child broke the steering wheel.

Ralph and Vanellope then decide to go into the internet to find a replacement wheel at eBay so her arcade game doesn’t get thrown away.

New characters are introduced in the movie such as Gal Gadot’s Shank and Taraji P. Henson’s Yesss. Shank is from an online game called “Slaughter Race” where users go to race against her crew and possibly get eaten by a shark coming out of a manhole. Yesss is an algorithm who decides what videos are worthy of being trendy on a website called “BuzzzTube.”

Vanellope ends up at the Oh My Disney website where she runs into Eeyore, Groot, Grumpy, and all the Disney princesses.

The scene with every princess was nostalgic for the true Disney fan. To see Mulan and Pocahontas interact with each other made the inner child in me ecstatic. Ariel even ends up doing a rendition of “Part of Your World,” but sings about wearing a shirt for the first time. The other princesses also poke fun at Merida’s accent since many people have said it’s hard to understand what she’s saying during her movie, “Brave.”

Although exploring the internet is dated, the movie offers a great take on it and delivers. Ralph is insecure in this film because he doesn’t want to lose his best friend, Vanellope. Vanellope is insecure because she isn’t sure if she wants to leave the internet and stay coded in “Slaughter Race” with Shank.

The moral of the feature is to fight your doubts and realize that letting go might be the best thing to do when it comes to difficult decisions.