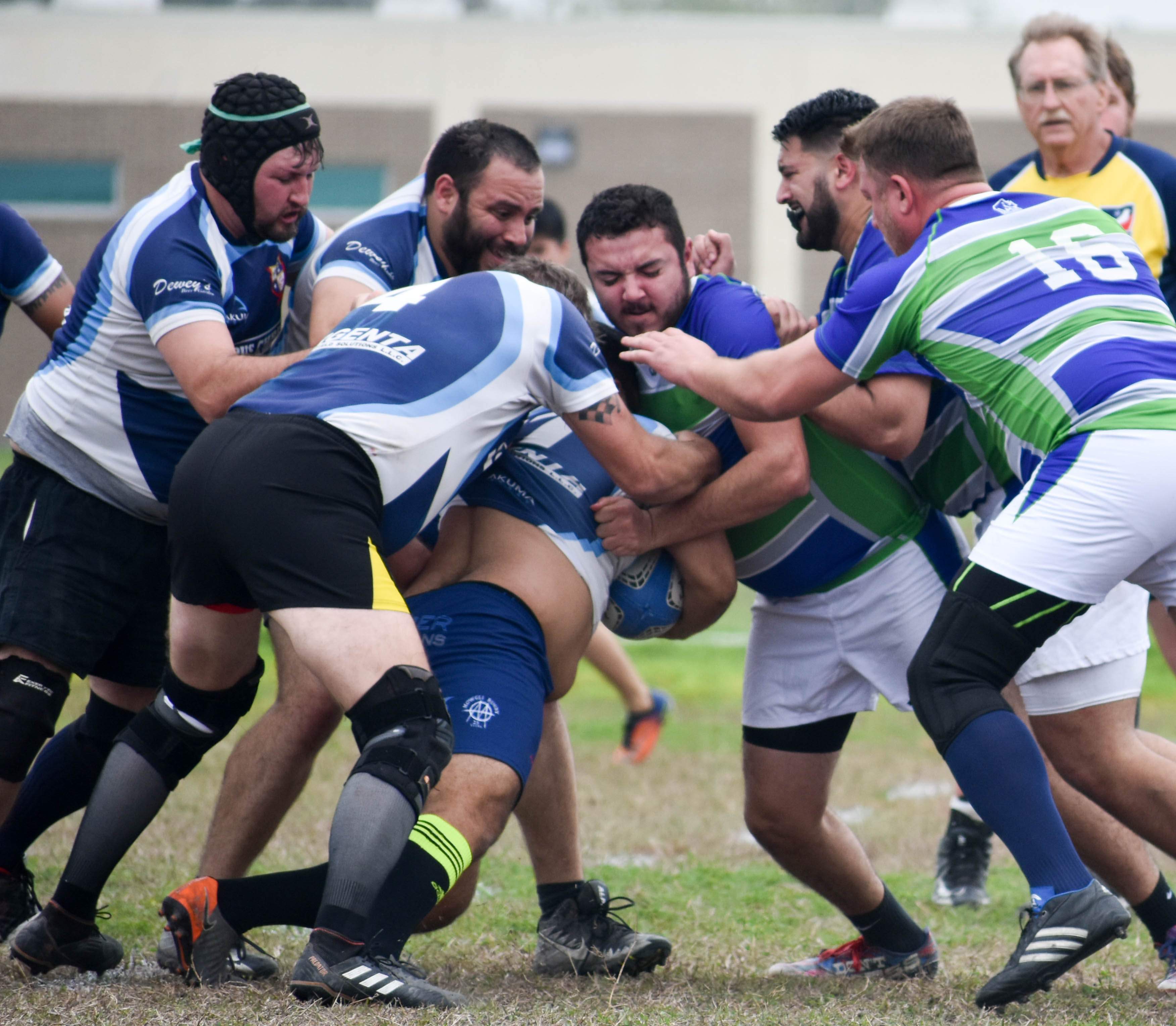 Fire Science major Michael "Lopes" Lopez and his teammates execute a maul to push the ball toward their goal line.

Cheering fills the foggy air as Michael Lopez joins the team huddle, throwing his right arm up into the air for the final shaka of the regular season.

The Islanders Rugby Club has won their last game of the season, beating the Corpus Christi Rugby team 24 to 15.

Although the Islanders Rugby Club is mostly composed of students attending Texas A&M University-Corpus Christi, one member is different. Del Mar College fire science major Michael Lopez is the only member of the club not attending A&M-Corpus Christi.

Rugby is nothing new to Lopez, who has been playing since his sophomore year of high school. Even after receiving two concussions from the sport, Lopez still refuses to quit.

“I would and always will sacrifice my body for my team. They are my brothers. I have played with injuries during games when I shouldn’t have and they have done the same,” Lopez said.

Camaraderie is a huge part of rugby and the bonds these players form with one another are thicker than blood.

“You don’t want to be hurt, because you want to be out there supporting your friends, supporting your comrades, and being able to provide them the support that they need. That’s the one thing about rugby and all team sports; you feel a responsibility to everyone else as far as working out, staying in shape, and then being on the field to support them,” Rugby Club Coach Clint DeWitt said.

Before the Islanders played the Corpus Christi Crabs rugby team, they were originally scheduled to play Trinity. However, the team forfeited days before the game, allowing the last game of the regular season to be a scrimmage.

As game day against what was thought to be Trinity gets closer and closer each and every practice begins to get very real for all of the players, including Lopez, who knows this game could decide their funding for the next season and whether the team makes it to the playoffs.

After every practice ends, Lopez ceaselessly walks to his car drenched in his sweat and lost in thought about what he can do to improve on the field for his team.

The day before the game the team found out about Trinity’s forfeit, and no one took it well. They had all worked extremely hard on and off the field to prepare for the game just to find out that it was not going to happen.

The Corpus Christi Crabs waisted no time stepping up so the Islanders would be able to play regardless of the disappointing forfeit.

The two teams gathered to execute a scrum around the center of the field, locking their bodies into a unified collective, and lodging their heads between the hips of their teammates. The whistle blew and both teams rammed into each other, neither one giving any ground as the hooker used his feet to kick the ball back to their team.

As soft winds swept against the spectators’ faces and seagulls cawed over the game presenting a calm atmosphere, the players engaged in an all-out war on the field. Injury walk-offs started happening more frequently as injured players lay on the field in desperation for the point to end so that they can be carried off onto the sidelines. The players’ cleats throw up dirt and grass, and once-clean uniforms were now covered in grass stains and brown streaks smeared on from being dragged into the dirt. Meanwhile, the people watching on the sidelines were kicked back enjoying the game and drinking a beer from an ice chest brought by one of the Corpus Christi Crabs players.

Although the Islanders Rugby Club did not play their best game of the season, team captain Nathan Jones still believes they did well under the circumstances,

“I think as a team we played OK. I think there are a lot of things that went into that game like factors such as Trinity forfeiting against us that kind of played down on the guys so we didn’t go in there with the motivation like we usually do and we definitely played like that. There was a lot of mistakes and stuff we made. We definitely didn’t play our top ball on Wednesday ’cause you could definitely tell there was a different feeling in the air when we were playing out there, but we did pretty well as a team,” Jones said.

As the game comes to an end, the Islanders secure the win and both teams cheer for each other in respect. What was assumed to be a group of men in heated competition turned into a group of men who all have one thing in common —a love for rugby.

The players begin to walk off the field. Lopez walks directly over to his family and girlfriend, hugging them and thanking them for all of their love and support. Although it was the end of the season, for Lopez, it is anything but the end because he knows that next season he will be right back at it again playing the sport he loves.

“I think he’s the better-than-average athlete. The one thing he does different from other players is that he watches, he’s a pretty smart guy, so he plays a lot with his head, his brain to see where he needs to be done. He’s not an extinctive athlete, he’s more someone that’s reading the plays and seeing where he has to go and with rugby that is what’s going to help him become a better rugby player, because as he gets the muscle memory of doing those certain things all the time he’s going to know exactly where to go and won’t have to take as long to think about it,” Coach DeWitt said.

Even though Lopez already had rugby experience when he joined, his friends, coach and rugby brothers have seen him come even further not only as an athlete, but also as a man.

The growth in character that the people close to Lopez have noticed is not unknowing to him, and what he has taught others through his character is something that he himself has come to learn starting from the day he began playing rugby.

“The biggest lesson I have learned from playing rugby is that you have to show no pain and push forward no matter what. Weakness is a state of mind,” Lopez said.

When it comes to explaining rugby, there are multiple ways to define it. There are different types of rugby and different ways to play it, but the rules and regulations are not why the men in the Islanders Rugby Club continue to play game after game and practice after practice no matter what injury they acquire.

It is not just an 80-minute game that you play for fun or as a hobby. To them it is so much more than that, and to Lopez there is no better way to explain it: “Rugby to me is a brotherhood; it’s my second family and a way of life. I plan on playing rugby for as long as I possibly can.”