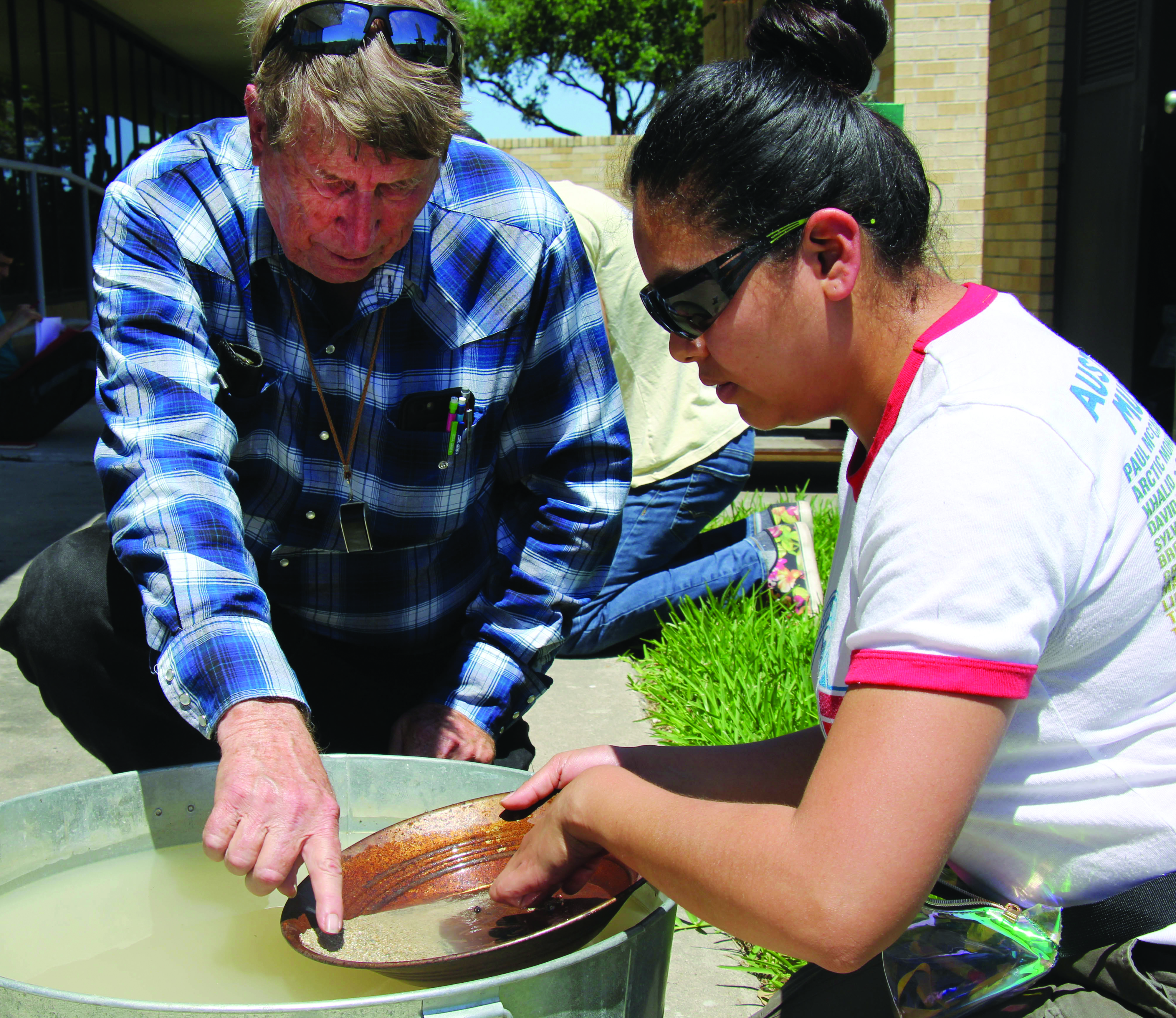 Del Mar student Johana Sagrero-Dams smiles from ear to ear as she dips a pan into a large bucket of water. The bucket is filled with different kinds of sediment, all varying in color and composition. It appears like nothing special from the outside, just a bucket of dirt it seems; however, hidden deep inside is actually buried treasure.

Right now, the geology student is a miner panning for gold. She shifts her pan from side to side, in various motions, shaking it desperately as she ejects the lighter sediments out of the way, in search of that one special prize. It’s only a couple of seconds later when she finally spots it — a bright shiny nugget. Fool’s gold, a mere piece of copper, but nonetheless a real treat.

It is this kind of excitement that is noticeably present in Vernon Kramer’s classes, a geology professor of 15 years at Del Mar College and a former miner.

Kramer speaks and looks like an old country boy. At 78, he is a man of many stories, built up over years of experience.

Originally from Victoria, Kramer says his love for geology stems from when he was a 7-year-old in the 1940s.

“They didn’t have TV then, they had a radio show called ‘The Lone Ranger’ and on that was a mining engineer and I was fascinated by the character,” Kramer said. “So, I told my dad, ‘What’s a mining engineer?’ and he said, ‘You don’t want to be one because they’re a dime a dozen!’ and so I became a mining engineer,” he says with a laugh.

Even though Kramer’s father was a building contractor who did not know much about geology, he says his love for it is still very much attached to his father.

“He didn’t know anything about it, he just loved going out with me and collecting things,” Kramer said.

Sagrero-Dams is an aspiring environmental geologist who used to be a political science major. After taking Kramer’s physical geology course, she decided to make the switch.

“He’s not here for a paycheck,” Sagrero-Dams said. “He legitimately likes his profession and wants to give us all the knowledge he’s gathered from experience of many years.”

There is one memory from Kramer’s metal collecting days that he says he will never forget.

While driving around town, a 16-year-old Kramer noticed an apartment complex replaced all its old water heaters and had left them out in the open. To him, it was a treasure trove of opportunity.

“So, I came out on a Saturday and a Sunday, got someone to help me, and I loaded like 75 hot water heaters and took it to my yard so I could take them to the trash dump,” Kramer said. “Well in class my father called me and said, ‘Where did you get those hot water heaters?’ and I said ‘Well from the apartment over there’ and he said ‘Did you talk to someone about it?’ I said no, and he said, ‘Well the Victoria Advocate says someone stole over 100 hot water heaters in broad daylight.’”

It is clear that geology has always been Kramer’s one and only passion. Facts about rocks and how the planet works come to him like it’s a breeze. Geology is his niche.

He can individually pinpoint the office supplies on his desk and say where their origins are from.

Living lavishly was never a part of Kramer’s lifestyle.

To put himself through college, Kramer worked as an underground miner. At $8 an hour, he went to work in the mines and used the money to pay for his tuition, living expenses and transportation for the first eight months before getting another job to finish out the semester.  He did not have his own car until he was 24.

“I know what its like to be poor and go through school,” Kramer said. “So what I did was I walked, and what I did was I rode with other people, like my very first date I had with my wife we rode on a bus.”

Seven years later he graduated from Texas Western College in El Paso with a master’s degree in mining engineering and geology.

What would ensue next was a series of twists and turns.

He would travel around the world four times over working for a variety of different companies. Kramer has worked in industries for oil and gas, aluminum, iron, steel, gold, silver, tungsten, tin, copper, dolomite, limestone and more. Name an element or mineral and he has mined it.

Some geologists prefer to work for the government or in the silence of their offices. However, Kramer has always preferred to get his hands dirty.

From Chile to Afghanistan and to Singapore, he has traveled to 37 countries for jobs.

According to Kramer, the best part about working overseas as a geologist is being able to provide the native people with the benefits of industry, such as jobs and skills.

“I am helping during the time I am there to improve their lives, no matter where I go. That’s why I like working overseas, because I can make a big difference in here,” he said.

In 2009, he was chosen to be the commander of a six-person crew at Mars Society’s Flashline Mars Arctic Research Station (FMARS) on Devon Island in the Canadian Arctic with private commercial space company 4Fronteirs.

FMARS is a simulated Mars habitat used to conduct sustained field operations under actual Mars conditions. The station acts as a testbed to help in the understanding of the technical and human aspects the first explorers may face when they land on Mars.

With his extensive background in mining, Kramer was able to put on a spacesuit and explore for minerals and collect samples, all in an effort to figure out how humans could create a living on the red planet.

“We were going through the plans on what you would have to take and what kind of housing you would build. They had engineers studying how we could use the soil there to make bricks,” Kramer said.

Kramer’s father died of a heart attack before he could see humans land on the moon. He says his humble beginnings would not have allowed him to comprehend such a rambunctious idea. Kramer laughs as he remembers his late father.

“He was absolutely convinced that it’s impossible for man to go to the moon, because he was born on a ranch in Freer County, what Freer is now before it existed,” Kramer said. “It was just beyond what he could accept.”

In 1969, during the day of the moon landings, Kramer was in New Mexico, about 50 miles away from his home in El Paso, working on his master’s thesis. Eager to get back, he timed his return just right so he could watch the broadcasting of the event live.

“I was driving on Interstate 10 and I was the only car on the freeway, and I drove through El Paso and there were no cars anywhere. Everybody was on the television,” Kramer said. “I mean, it was like, what happened to planet Earth? I’ll never forget that sensation.”

Kramer was inspired to become a teacher after watching the 1988 film “Stand and Deliver,” which is about a calculus teacher struggling to get grip on his unruly students.

“I quit a high paying job so I could become a third grade teacher for a year,” Kramer said. “My salary was actually less than I was paying in taxes with my previous job.”

Kramer would leave his job as a teacher and work in the industry in Mexico before coming back to teach fourth grade. Eventually, he would make his way to Del Mar College as a professor.

“The longest I’ve ever worked at one place is five years and I’ve been here for 15, which I can’t believe it,” he said.

Right now, Kramer’s friends are traveling around the world, trying new things and delving into their own hobbies, but Kramer says that isn’t him anymore, because he’s been there and done that. He would rather stay home and continue teaching.

Nearly 40 countries and several elephant and mule rides later, he says let them do the traveling.

“I’ll tell you what, it’s the students that inspire me,” he says.

It is obvious that Kramer is well loved and respected by his students and colleagues. He has won the Teacher of the Year award and his students seem to jump at any opportunity to say something positive about him.

“He always establishes a useful tranquility in the classroom; all students focus upon what he has to say,” said Jack Southard, chairman of the Department of Natural Sciences.

Every class period starts with a short motivational speech from the importance of setting goals in life to maintaining a studious lifestyle.

Kramer uses his background in mining and incorporates that into his daily lessons, because according to him, everything in the natural world is directly related to mining, no matter how you put it.

It’s one of the reasons why Kramer loves teaching geology, because he can reconnect it with his past. Every year, he takes his students on field trips to mines all over Texas and teaches them what it is like to be a miner.

“I give them all the stuff that I had to learn the hard way, so what I am doing is giving them that step up in there,” he said.

All those years of experience have shaped Kramer into the person he is today. Pinned around his office are photos of his journey, from the mines to Mars. He says he can’t believe people have paid him to do the things he loves.

“See, what I tell everybody is, I’ve never had a job in my life,” he said. “I have enjoyed every job I have ever had, because if I don’t want to do it, I wouldn’t go. I wouldn’t do it.”

As far as actually visiting Mars, Kramer says he may be a little too old for that; however, he still smiles and laughs at the prospect.