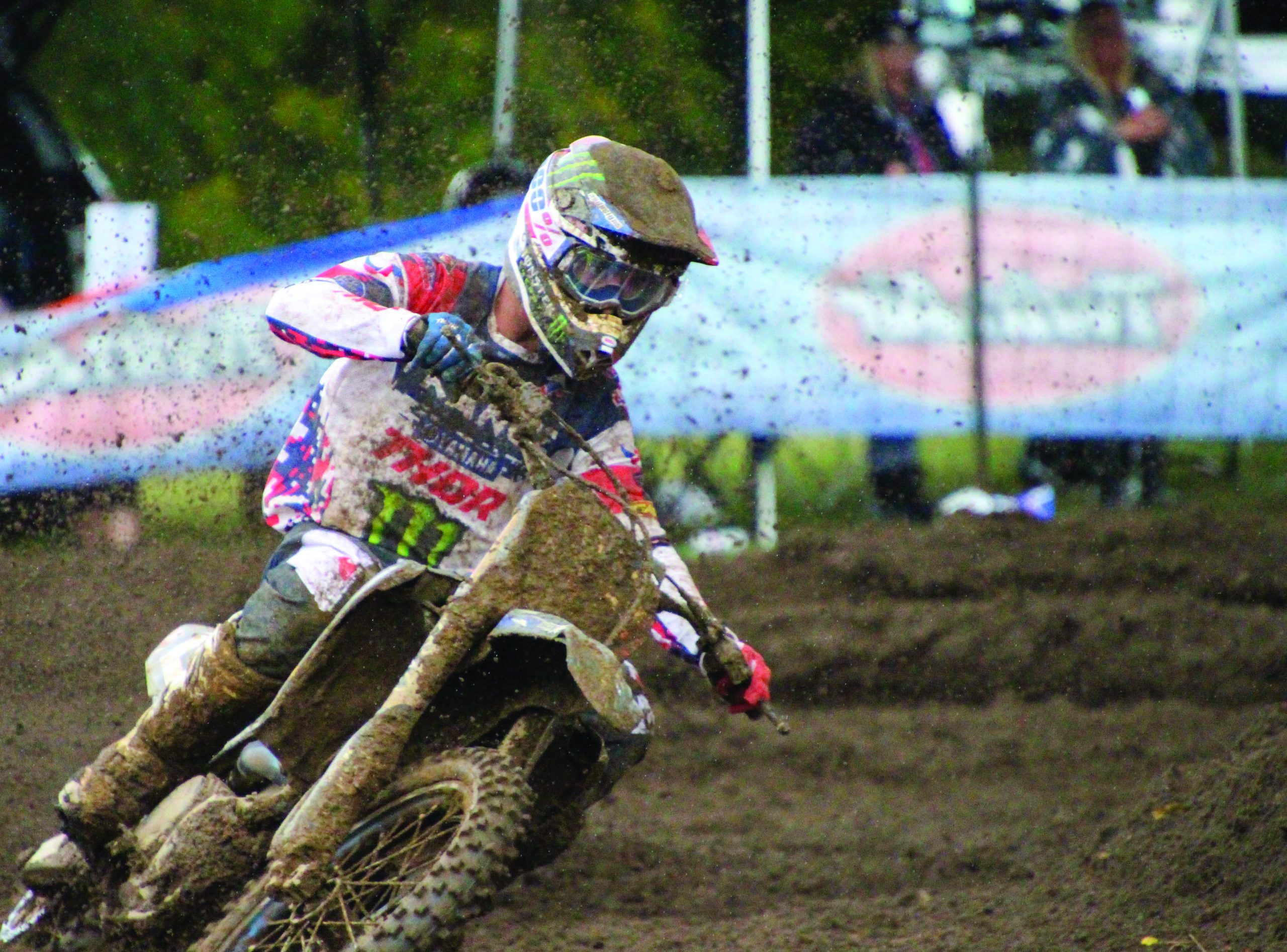 Often referred to as the “Olympics of Motocross,” the 75th running of the event was held at Redbud Track and Trails in Buchanan, Michigan, Sept. 24-25. Thirty-two countries each assembled a team of three riders to compete, but only twenty of them qualified for the final three races.

For only the fifth time ever on American soil, Team USA came to win with Eli Tomac, Justin Cooper and Chase Sexton, who brought home the Chamberlain Trophy after 11 long years.

A cold, consistent drizzle and sporadic showers subdued the Sunday crowd, mud was unavoidable and seating was almost non-existent outside of a muddy port-a-potty and one set of muddy bleachers, but motocross fans are a hardy bunch who braved the weather with a sea of umbrellas and ponchos.

Most vendors were cash only due to almost no one having cell service or internet, which was a major inconvenience for attendees and media. Those who brought cash could enjoy the carnival-style food along with some local food trucks. The smell of barbecue smoked ribs and funnel cake paired nicely with high octane exhaust fumes.

In the paddock, or pit area, large well-funded teams like USA, Italy, Belgium, etc., were filled with multimillion-dollar tour bus-style rigs loaded with bikes and employees while the pits of smaller teams such as Israel and Morocco resembled a group of friends hanging out.

Many international attendees seemed to have more reserved nationalistic pride on foreign turf but as expected the Americans were the loudest and drunkest, with the Aussies close behind.

The start of the first race was met with a deafening combination of 40 motorcycles and thousands of roaring fans equipped with flags, smoke bombs, cow bells, airhorns, chainsaws and any other noisemaker you could imagine.

In motocross it’s often said that the 41st competitor of a race is Mother Nature, and this was no exception, Saturday was beautiful weather with a perfectly manicured track that formed multiple high speed racing lines to provide many passing opportunities for riders and make for great qualifying races. Sunday was totally opposite. The track crew’s efforts to prepare the course for excessive rain did not go unnoticed but it was still very muddy and quickly formed into a mostly one-lined racetrack with very few areas to make a pass stick. This forced the riders to stalk their opponents from a distance before attempting an overtake to avoid losing their vision from the roost of the rider ahead.

After the final race ended fans stormed onto the racetrack starting straight and then toward the podium, toppling over several barricades. This was the peak of the excitement for fans and relief for the Americans who feared a repeat of Team USA’s loss to France in 2018 at Redbud Motocross Des Nations.

Overall the camaraderie between both the fans, countries and manufacturers was high. The Americans embraced Team France, which was booed for winning their last time competing in the U.S., and Chase Sexton’s red Honda underneath the rival blue Yamaha tent celebrating with his typical opponent Eli Tomac after the podium ceremony exemplified this.

The podium teams put in impressive rides with each earning an individual moto win, notably American Eli Tomac, who put on a dominating performance in the first moto with an early lead that took him all the way to the checkered flag. In moto two the 19 year old Australian phenom Jett Lawrence appeared to be right at home and having fun in his first race on the full sized 450cc motorcycle after two championship winning seasons on a 250cc. Frenchman Maxime Renaux was an unknown but formidable opponent to Sexton and Lawrence, who attacked Renaux unsuccessfully for the last 10 minutes of Moto 3. Other honorable mentions include the defending Italian champions Antonio Cairoli, Andrea Adamo and Mattia Guadagnini, who came just shy of a podium position.

With candidates for the Districts 2 and 5 seats as well as the At-Large position running unopposed, the Del Mar College Board of Regents recently canceled the General Election. Each of the three Regents will serve for a period equaling six years, which will conclude in 2028.Nine regents serve on the Del Mar College Board of Regents. There are five district-based regents and four at-large regents. All of the territory that is under the jurisdiction of the Calallen, Corpus Christi, Flour Bluff, Tuloso-Midway and West Oso Independent School Districts is included within the boundaries of the Del Mar College District.…