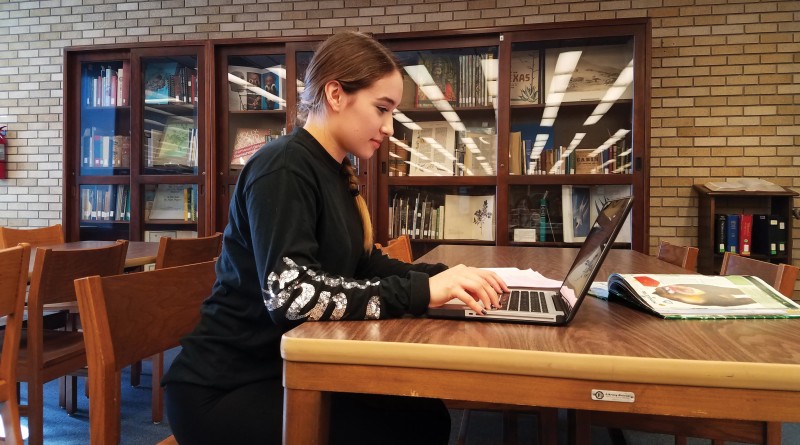 Alyssa Samaniego sat in the library with her laptop illuminating her face. Her books were open and her notes were spread out in front of her.

Samaniego said she is most stressed about her math exam that she has coming up, but she has ways to combat her stress: “working out, just taking a break, walking my dog.”

Most students are familiar with the extra stress brought on by final exams, one test that can make the difference in an A or a B or even passing and failing.

Melissa Goonan, tutor support service coordinator at the Student Success Center, said the first step for fighting finals overload is to get things in order.

“We offer tutors and success coaches, and they can help with where to begin,” Goonan said of the SSC, located in the St. Clair Building.

Tutors, according to Goonan, offer one-on-one or small group sessions on a specific subject that they personally have done well in. Success coaches help prep for exams and offer tips on time management, and “can help you make a plan,” Goonan said.

Goonan also said the SSC isn’t the only place for students to seek help.

“The Stone Writing Center is great, we have the Collaboratory, and lots of other great resources on campus,” she said. She also recommends that students reach out to their professors early for clarification on what material is most important.

Students can also find respite in the counseling center, specifically the Zen Zone. The Zen Zone is a quiet space on both the East and West campuses where students can take a break. It offers massage chairs, calming music, tea and a relaxing atmosphere.

Soto also had some suggestions on ways to reduce daily anxiety.

“Exercise is one of the best ways to cope with stress,” she said. “There are breathing exercises, eating right, but sleep is the most important.”

Time management, according to Soto, is also important for not getting overwhelmed. Soto said students should study for 25 minutes at a time and then take a short break.

Goonan and Soto both stressed that waiting until the last minute and trying to learn everything the night before is not a good idea.

“That does way more harm that good,” Soto said.