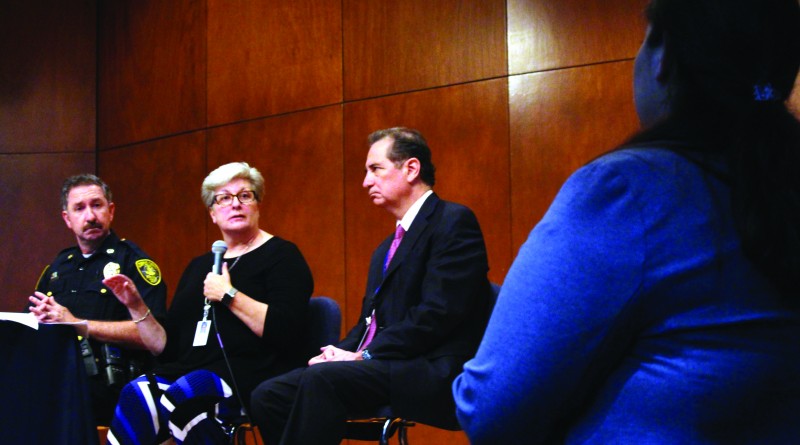 The fall semester will bring big changes for Del Mar as concealed carry will finally be making its debut on campus. Two-year colleges are just now being affected by the new law allowing certain students to have a weapon on them as long as it’s hidden. The law has been a hot topic for discussion and debate and has sparked activity on both sides of the argument including websites petitions and more from concerned students.

President Mark Escamilla, Collegiate High School Principal Tracie Rodriguez, Vice President Beth Lewis, Capt. Bill Breedlove with the Corpus Christi Police Department, Lt. Lauren White and DMC general counsel Augustin Rivera were all members of a panel that spoke on April 18 as part of the Foghorn News’ Conceal and Carry Forum. The forum was meant to be a place that students could learn more about how this would affect them and to make sure their questions were answered.

“This is going to be a big change and we want to make sure that people have the facts and know that we’re listening to what they have to say, their concerns and fears,” Lewis said. “We understand people are going to be uncomfortable, that they’re not going to like this. I always want students to ask everything on their minds.”

The law has already been implemented at four-year schools and has been coming this way for years.

“We’ve been working on this since 2015,” said White. “We’re not by any means trailblazers in this, we’re in the middle of it.”

Students came to the forum had the chance to ask their questions directly to the panel and get answers about their safety. Not many know that the people who will be able to carry weapons on campus now will have to have a specific license to do so. In addition, anyone who gets a weapon must go through a process of training and certification.

“I came to this forum to learn as much as I can,” said Esteban Macias. “It’s not the best scenario for me but I’ve got to deal with what I’ve got.”

While some came with questions, others came with concerns. Josselyn Obregon spoke to the panel to address her discomfort and bring up the reality that some students, for example, students from other countries, may also be unhappy with this change.

“This is a very uncomfortable situation for me,” said Obregon. “I see a firearm on a man and I get scared.”

The response was that the law only covers concealed weapons. Anyone with a firearm can’t have it out in the open or visible as per the law.

“They’re supposed to be hidden, it’s not supposed to be known,” said Escamilla. “What’s probably going to affect the college is the announcement. For the most part, things calm down with time.”

Students also brought up the possible affects this law could have on students suffering from PTSD and other mental illnesses that could be exacerbated by the knowledge of guns on campus. Counselors are readily available to help any students affected by this and the panel emphasized that anyone who felt unsafe should absolutely bring it to the attention of any employee of the school.

“It’s going to affect everyone’s minds… the collective psyche of the college. If someone has a concern, they need to approach as soon as possible,” said Escamilla. “If someone’s really affected and needs to be helped through this, reach out. There’s any number of ways a student could approach.”

According to the panel, there are going to be areas of the school where this law does not take effect. While the areas are currently not permanently assigned, some areas where weapons will remain prohibited are labs with certain material hazards, the childcare center, areas designated for counseling, polling places and areas where formal processes are taking place, such as grade appeal court.

Collegiate will be treated like any CCISD campus and will also be a place where weapons remain prohibited.

“We’ve been doing a lot of education,” said Rodriguez, principal of Collegiate High School, which exists on the second floor of the St. Clair building. “We have to educate not just students on campus but also families. Our kids are going to universities where it’s already enforced. We can’t control the laws, we can only control ourselves.”

While this forum may have been one talk in the midst of a larger discussion, the steps towards normalizing this law and its implications are something students look for in a time of transformation.

The panel emphasized a sense of unity at Del Mar as the school navigates the transformation this law has spurred. The speakers at the forum reminded students that one of the only was to have control over a situation is to be educated.

“Be vigilant, it’s the time we live in and we can be afraid or take it head on,” said Augustin Rivera. “It’s a team effort and you’re all part of the team.”