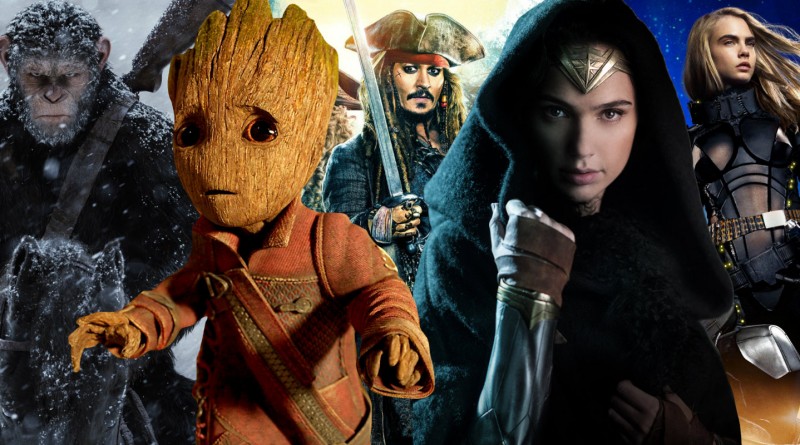 This summer movie season is bringing the heat from superheroes, space horror, ancient beings, pirates and even apes. Here’s what you can expect at the box office this season:

The latest film has Peter Quill (Pratt) and his team set out in an adventure to seek out Quill’s father in the farther part of the cosmos.

With the last film’s soundtrack and comedic presence I look forward to seeing Vol. 2. Quill and Gamora’s (Zoe Saldana) relationship leaves me in suspense because I was screeching for them to connect in the first film. Let’s not forget Baby Groot (Vin Diesel) making it the main reason why my kids want to go see the film.

You’re not going to have to wait until Halloween to get in your scary movie cravings with “Alien: Covenant.” The latest installment in the Alien franchise is returning with Ridley Scott as director. Starring Michael Fassbender and Katherine Waterston, the film features a crew that lands on a distant planet to colonize it.

The trailer already made waves with the graphic content and jump-scares. The film is the eighth installment in the Alien series and the second prequel for “Alien.”

Not only will this movie return to its horror roots, it will also offer scary fun for science-fiction fans alike.

‘Pirates of the Caribbean: Dead Men Tell No Tales’ (May 26)

Yo ho, yo ho, a pirate’s life for me. Johnny Depp dons the bandana as Captain Jack Sparrow once again with Disney’s fifth installment in the “Pirates of the Caribbean” franchise. Depp is not the only returning cast member, as Geoffrey Rush and Orlando Bloom reprise their roles as Barbossa and Will Turner, respectively. This time, the crew will be facing off against the dreaded Captain Salazar, played by Javier Bardem.

The biggest attraction about this movie is the return of Bloom. It will be interesting to see where Turner is now and how he will play back into the franchise. The trailers released have depicted a darker-than-usual Pirates of the Caribbean. It almost feels like the franchise is maturing to suit the kids who grew up watching the movies, while still maintaining that PG-13 rating.

Despite the disappointing “On Stranger Tides,” this next installment looks to bring the series back to its roots with returning characters and cast members.

In a world full of male superheroes stands a woman who is everything they are and are not. “Wonder Woman” is definitely worth the watch. This movie adds to the Justice League timeline while also appealing to comic book fans and women everywhere. This movie is also directed by a woman, a comic book-based movie first.

The trailer shows our protagonist, Diana, growing up on an isolated island of Amazon women with her mother, Hippolyta. They worship Zeus and Diana was actually born of Hippolyta’s desire for a child without a man. While growing up, Diana is told of all the great things the women of her home will grow to achieve. Naturally it fills her with this determination to be the strongest. Around the same time a World War II fighter pilot crashes into their home island, which is supposed to be isolated. Diana, who has already proved that she is the strongest, joins him in the war. This of course means leaving home and facing a new world.

Under the guise of an ordinary woman she blatantly stands out with her bulky sword and shield. This adds a comedic feel and also a moving display of how she presents herself to the world. This movie will show the origins of this powerful Amazon Princess herself and how she will play into the Justice League in films to come.

Tom Cruise, Annabelle Wallis and Sofia Boutella star in the new movie “The Mummy,” bringing back the original theme from 1999, with a few minor changes.

An ancient princess (Boutella) whose destiny was unjustly taken from her is awakened from her crypt beneath the desert, bringing her malevolence and terrors that have been growing inside her for over a millennium.

“The Mummy” is the first installment in a possible Universal Monsters films. They were once considered the reigning studio of horror films. One character making its appearance in this film is Dr. Henry Jekyll, played by Russell Crowe. It is rumored that the next film will be the story of Dr. Jekyll and Mr. Hyde.

Tom Holland returns as the famous web-slinger in “Spider-Man: Homecoming,” the first film in the franchise done by Marvel Studios in collaboration with Sony Pictures. This is now the third incarnation of Spidey, with Tobey Maguire and Andrew Garfield previously portraying the role.

Taking place after the events of “Captain America: Civil War,” Peter Parker (Holland) continues to fight crime as Spider-Man with help from his mentor Tony Stark (Robert Downey Jr.) while also trying to balance his life as a high school student. But things begin to turn bad as a new threat as Adrian Toomes (Michael Keaton), also known as the Vulture, starts causing havoc, and Peter must put a stop to him while also showing he’s not just a nerdy kid from Queens.

Although Maguire and Garfield did what they could, both actors couldn’t quite portray both a great Spider-Man and Peter Parker, making their performances inconsistent. Holland made a strong impression after “Civil War” in the short time he was in the film. With director Jon Watts at helm, this film looks to be a great standalone Spider-Man film set in the Marvel Cinematic Universe.

This movie looks to be the most action packed and intense in the series. We’ve made it through Caesar’s upbringing and becoming ape leader in the first film, and a rogue ape with a personal vendetta against humans in the second.

This movie picks up after the epic battle between Caesar and Koba where human military forces are finally on the way, bringing the inevitable war between man and ape that Caesar had tried so desperately to avoid.

Starring Woody Harrelson as The Colonel, this war savvy military leader is on a hell bent mission to end ape-kind.

Caesar will have to internally battle himself as he has always preached to his fellow apes that killing humans is wrong, but with his species at stake will he let go of his previous beliefs and become the killer the humans have feared all along.

‘Valerian and the City of a Thousand Planets’ (July 21)

In the 28th century, Valérian (Dane DeHaan) and Laureline (Cara Delavigne) are two special operatives who usually maintain order throughout the human territories. Under assignment from the minister of defense, the duo embarks on a mission to Alpha, an ever-expanding metropolis where diverse species gather to share knowledge and culture. When a dark force threatens the peaceful city, Valerian and Laureline must race against time to identify the menace that also jeopardizes the future of the universe.

Just by the trailers released, “Valerian and the City of a Thousand Planets,” a film by Luc Besson, director of “The Fifth Element” and “Lucy,” already proves to be a sci-fi lover’s visual dream. The film is adapted from the French sci-fi graphic novel “Valérian: Spatio-Temporal Agent” by writer Pierre Christin and artist Jean-Claude Mézières. First published in Pilote magazine in 1967, the final installment was published in 2010.

If the movie follows the comic, it will have a delightful combination of diverse alien species, visually appealing planets, a hint of time travel, virtual reality and spiced off with some humor and romance.

Director Christopher Nolan, best known for movies like “Inception,” “Memento,” and “The Dark Knight” trilogy, takes movie fanatics back in time to World War II telling the story of the Dunkirk evacuation.

The German Army on the beaches of Dunkirk surrounds soldiers from Britain, Belgium, Canada and France. This resulted in these forces evacuating the beach in Operation Dynamo between May 26 and June 4, 1940, during the early stages of World War II.

With list of talented actors such as Tom Hardy, Cillian Murphy, Kenneth Branagh, and Mark Rylance leading the film, it looks to be a realistic and gritty take on this significant point in history. One Direction member Harry Styles even takes a crack at acting and has everyone curious if Nolan can squeeze a great performance out of him. The film will also have special screenings using 70mm and 35mm film to give it a more old-school feel and fit with the theme.