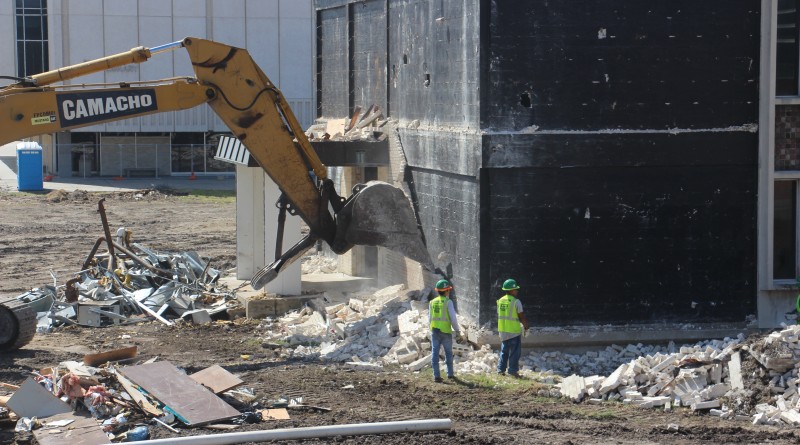 Crews tear down the English Building on Monday on East Campus.

General Academic, Music Building to be built at site

After a three-week delay, demolition of the exterior of the English Building resumed Monday.

Crews started tearing down the building on July 16. The project originally was expected to take two weeks. The building is being torn down to make way for the construction on the General Academic and Music Building Phase II.

The demolition is now expected to take another two weeks, according to Manuel Echabarria, a worker with Barlett Cocke Contractors, which is handling the demolition.

GAMB Phase II is estimated to cost $46 million, which is being funded by a $157 million bond passed by district voters in 2014, and is the largest project in Del Mar College’s 2014 capital improvement program.

The 127,500-square-foot project will house the Division of Arts and Sciences and the departments of English and Philosophy; Communications, Languages and Reading; Mathematics; and Social Sciences. The building will also complete the new facilities for the Music Department started in Phase I.

The project will consist of interconnected buildings and provide state-of-the-art facilities for DMC faculty and students and new gathering spaces, pedestrian pathways and plazas, including the Mike Anzaldua Plaza.

The English Building was built in 1967.

“Some of those classrooms were so small, some of them were so old and it’s really hard to get the technology installed in some of those rooms that you come to expect these days,” said Claudia Jackson, DMC’s executive director of strategic communication and government relations, in a previous interview with Foghorn News.

Mike Anzaldua Plaza, located at the central north/south axis of the GAMB Phase II, will be a linear green space memorializing the DMC beloved educator and will include shaded and wind-protected spaces to sit, read, gather and entertain.

Heritage Hall is expected to be demolished as well, and the new building will house Social Sciences, English and possibly Math.