It would appear now more than ever Americans cannot change a channel on their televisions, turn a page in the newspaper or listen to the radio during their daily commute without hearing a story about undocumented immigrants and refugees.

The stories told are horrific, and presidential candidate Donald Trump has even commented, calling migrants from the southern border “rapists.” But what if we step aside from all that and look at the situation piece by piece through the eyes of everyone involved in this “pandemic”? Would that close the gap on the vast starkness of desert between “them” and “us”?

The Foghorn decided to take a closer look at the issue this semester. We’ll be examining it from all sides — law enforcement, the migrants themselves and the effects on U.S. citizens.

To better understand we should first examine the difference between an undocumented immigrant and a refugee. Customs and Border Protection Intelligence Agent J. Villarreal describes a refugee as “A person who has been forced to leave their country in order to escape war, persecution or natural disaster.” A good example of this is the thousands of Syrians who recently have fled their country to escape ISIS. However, undocumented immigrants cross the border for other reasons, Villarreal said.

“Migrants from Mexico differ based on the reasons they are fleeing,” he said. “Most Mexicans and other than Mexicans [Guatemalans, El Salvadorans, etc.] are fleeing solely for economic reasons.” 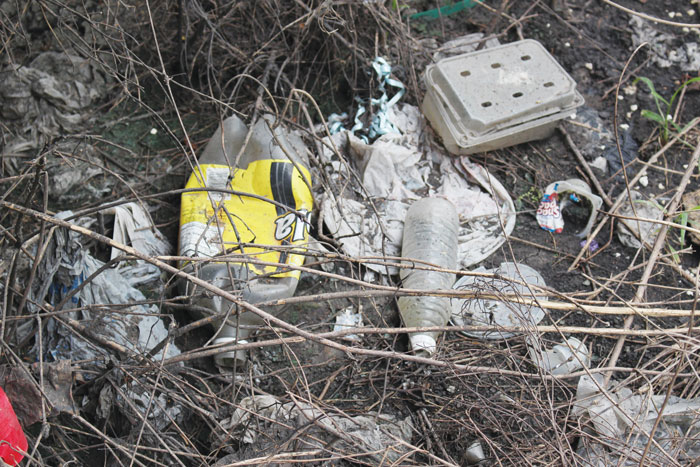 Litter piles up along trails frequented by immigrants in the Coastal Bend.

So why is America so harsh toward people wanting to cross our borders who only want to better themselves and take care of their families, but yet on Sept. 10 the Obama administration announced plans to allow as many as 20,000 refugees into the country? The answer is simple — not everyone entering our country has good intentions, so the laws are written to protect us from those couple of bruised apples that end up in the bushel.

Local, state and federal law enforcement agencies work hard to keep the good people of America safe. Customs and Border Protection’s mission is to safeguard America’s borders. They work diligently and focus on transparency and building partnerships to secure a 21st century border against a variety of threats and adversaries. 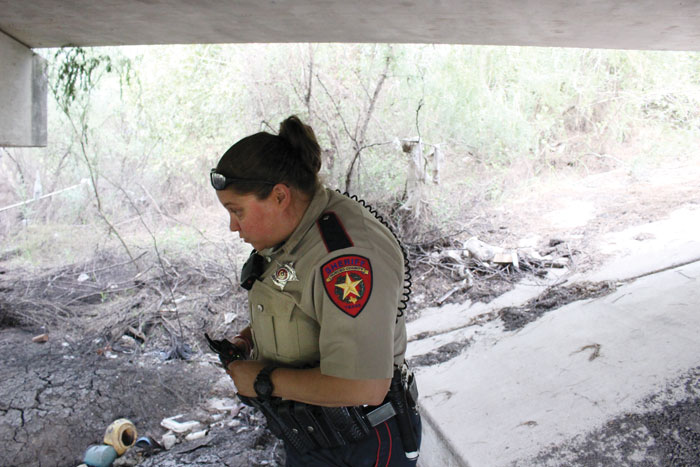 Deputy Valerie Garza, with the Nueces County Sheriff’s Department, checks a trail known to be used by undocumented immigrants earlier this month near Farm-to-Market Road 2826 and County Road 85, just south of Robstown.

Customs and Border Protection reported that of the 486,651 individuals apprehended nationally, 468,407 were apprehended along the nation’s southwestern border. The report stated 66,638 migrants came from El Salvador, 81,116 from Guatemala, 91,475 from Honduras and the remaining 229,178 from Mexico. As for those bruised apples, 8,013 of the migrants captured in 2014 were wanted for serious crimes and 11,494 were found to be inadmissible for entry into the United States and or labeled as high-risk travelers.

In 2014, Customs and Border Protection air crews in Corpus Christi and Jacksonville, Florida, detected 149 suspected smuggling vessels and aircraft. These operations resulted in the seizure of 112,224 pounds of cocaine estimated to be worth $8.4 billion.

“Things have been slow compared to a while ago,” Larew said. “They’re getting smart and instead of taking a large number of illegals across the border they’re making more trips with less people.”

Because Customs and Border Protection deals day to day with such an influx of individuals and scenarios the agency keeps its commitment to transparency, and in May of this year it publically released its policy handbook regarding use of force. The agency has redesigned its basic training curriculum and holds the standard of excellence by continuously evaluating its use of force policies and procedures.

Following a current law enforcement trend in the U.S., Customs and Border Protection has begun testing less lethal tactics when apprehending migrants. This preventive measure will help aid in the safety for both agents, the undocumented and, of course, U.S. citizens. Some examples include a system designed to deflate vehicle tires, an integrated data system to record violent migrants and body cameras. The agency also delegated the authority of Secretary of Homeland Security Charles Johnson to investigate allegations into employee criminal misconduct.

Because all efforts are essential to the security and safety of the United States, it is imperative that we have a good budget. For that reason, the 2015 budget for the Department of Homeland Security is $60.9 billion. Of that, $362 million goes toward maintaining the infrastructure and technology needed to protect the borders of the United States. In addition the Department of Homeland Security has the authority to use $3.1 billion in fee collections from 224 domestic and foreign offices. The money collected will come from the U.S. citizenship and immigrations services network.

The plan is to modernize the immigrations benefits process and strengthen fraud protections, while targeting criminal migrants who pose a threat to national or public security. It’s also aimed at individuals who have recently and illegally crossed the borders and to prevent repeat offenders from reentering the U.S., much like 45-year-old Juan Francisco Lopez-Sanchez, who was deported back to his country of origin five times before he allegedly shot and killed Kate Steinle in July in San Francisco. In the same month, the Pew Research Center reported there have been about 11.3 million undocumented immigrants living in the United States since 2014.

C. Robert Gonzalez has several years’ law enforcement experience, including three years with the Nueces County Sheriff’s Office. He is also an Iraq War veteran and served five years with the U.S. Army. He now is a Del Mar College student.