Based on the 1976 horror film featuring Sissy Spacek as the iconic Carrie White, “Carrie: The Musical” is set to hit the stage this October at the Harbor Playhouse.

Taking place in modern times, Carrie is an awkward teenage girl with telekinetic powers who lives a very lonely existence. It isn’t until her classmates humiliate her at the prom that she unleashes her powers on her peers and wreaks havoc on everyone and everything in her path.

First-time director and former Del Mar student Courtney Richter was thrilled when she was chosen to direct the musical.

“I’m a huge horror fan. I’m also a film buff in general. So the fact that this particular content is an icon in culture for horror and film in general is a pretty big stepping point for me,” Richter said. 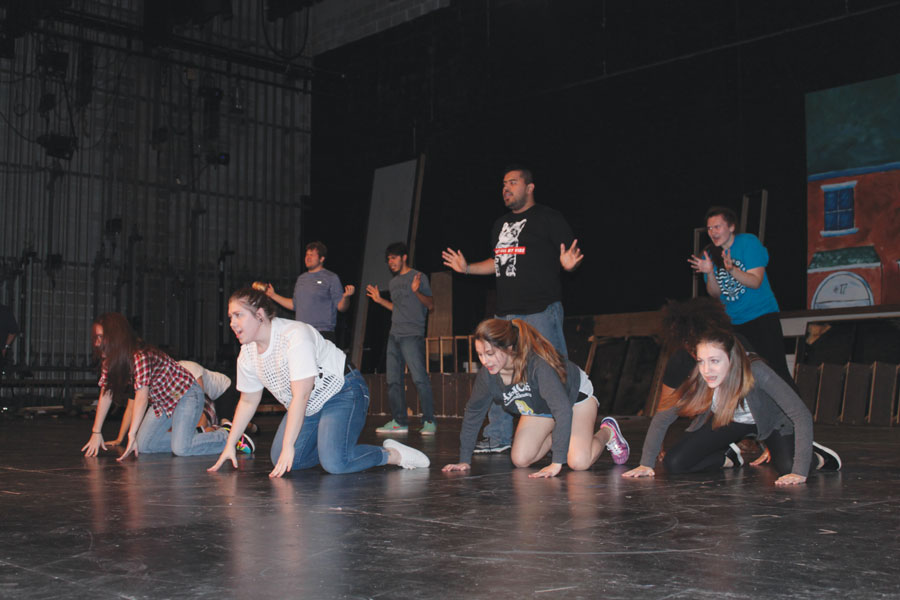 The cast rehearses for “Carrie: The Musical” late last month at the Harbor Playhouse. The show runs through Nov. 1.

The whole experience has been one crazy ride for Richter, but she has a strong team standing behind her.

Assistant Director Nicholas Sheffield jumped at the chance to work with Richter when she asked him to be involved.

“I was absolutely ecstatic because Courtney is someone I’ve wanted to work with for as long as I’ve known her., he said.

As assistant director, Sheffield helps out in many different aspects. “I’m kind of the support system,” Sheffield said. “A lot of my work was done in the beginning where we dealt specifically with the ensemble versus the principle characters, so my job was to take the ensemble and get them to define their characters.”

“When they unveiled the set design to the cast, I got emotional because I was moved by how passionate Courtney and Nick are about this piece,” cast member Shanyn Trammell said. “For them to take this as seriously as they are was very endearing and something that I haven’t experienced in a long time.”

Trammell will portray Carrie’s mother, Margaret White, and she is eager to take on such a dynamic role.

“Margaret is a deeply convicted and tragically flawed character. She loves her daughter but doesn’t have the ability to connect with her in a normal way,” Trammell said. “I knew it was something completely different that I had never done before, to play the mean lady, and so I wanted to try it out.”

Trammell believes that this show is very relevant to society today because of the themes of bullying, acceptance and perception.

“As fun as the horror and everything is, there’s a lot of heart in the show and I think everyone can kind of relate to Carrie,” Trammell said.

Sheffield wants people to think of this show not so much as a standard musical, but as a story with a message.

“I think it’s something that hasn’t been represented on the Harbor Playhouse stage before and it has a very profound message,” Sheffield said.

Richter feels that a very interesting point is to be made about society in this show.

“I feel like it’s a point that is definitely present in the movie and explained further in the book, but in our show it’s the meaning and purpose behind it that make me feel like it’s a very big 180 from what people think they are going to come in and see in Carrie.” Richter said.

For show dates, ticket information and other inquiries, call 888-SHOW or visit HarborPlayhouse.com.

WHAT: “Carrie: The Musical”