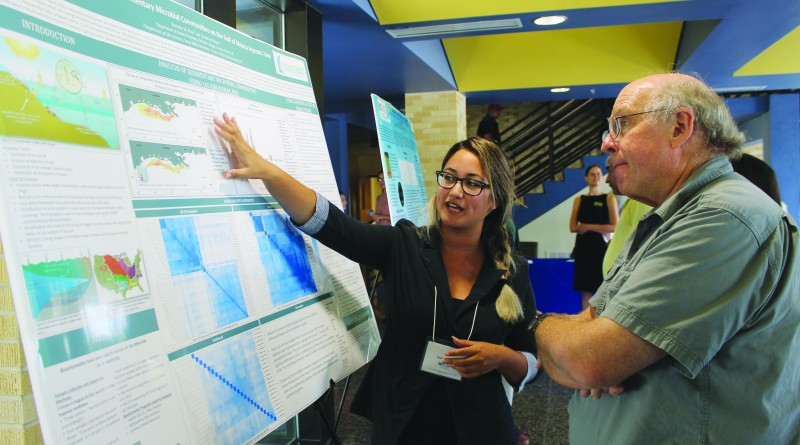 Science students recently presented their summer research during the Del Mar College Student Internship Research Sharing Session in the Garcia Science Building. Seventeen students were chosen for this internship and shared their experiences to encourage others to pursue careers in science.

Daisy Zhang, associate professor of biotechnology, said she was impressed with the students’ hard work.

“I set up the internship spots for them and contact their supervisor on site and to make sure they are performing well,” Zhang said.

One of the students showcasing her research was Amber Siembida, who did her research on the study of bacterial transfer from an exotic ranch to a livestock farm in South Texas.

“I went to an exotic ranch this past summer and collected fecal and environmental samples to compare them to samples from a steer farm last year where an unknown bacteria was found,” Siembida said.

Her poster represented the flow of all the different testing done to determine the bacteria that was isolated from the exotics was the same as last year. Siembida, who began her internship in May and finished it in the middle of August, made an interesting discovery while doing her project.

“We found that one of the bacteria the water buffalo had was from a bacteria that was isolated from the Mojave Desert,” Siembida said.

Jaime Adame interned at the U.S. Department of Agriculture-Agricultural Research Service’s Arid Land Research Station in Maricopa, Arizona. He researched lipid bioengineering in plants to produce biofuels in leaves, which proved to be some work.

“Initially we had 400 lines then eventually narrowed it down to 20,” Adame said. “There’s four strategies of fatty acid production called push, pull, packaging and protect.”

Adame took the internship on the second week of June but because of the extent of the research of his project having downtime wasn’t in the cards.

“I learned a lot more about plant chemistry then I ever thought I could, but due to the nature of our experiment’s designs waiting for plants to grow there wasn’t a whole lot to do in between then,” Adame said.

Participants who were involved in this internship had their work compared to the top tier four-year and Ivy League Universities, leaving Zhang more than pleased by their success.

“They absolutely exceeded my expectations they did wonderful,” Zhang said.