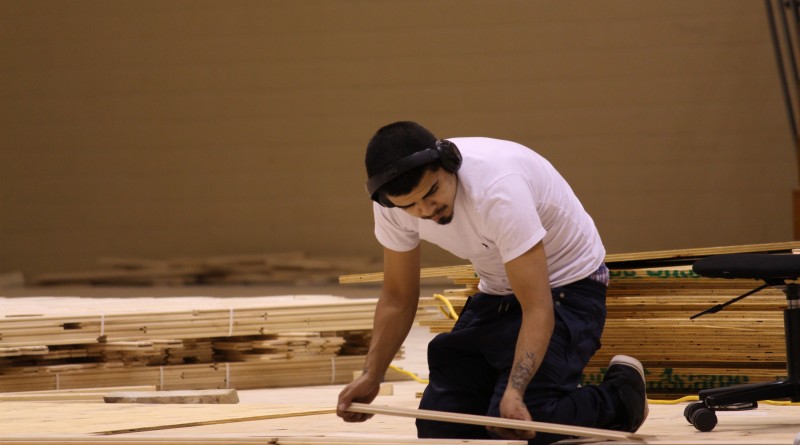 After nearly 30 years, the gymnasium floor is being replaced. While the college hoped to have the gym open in time for the start of the spring semester, the work is about two weeks behind schedule and due to be complete by February.

“The floor was warping … it was becoming wavy, having ridges on the floor,” Phillips said. “They started taking out the old floor after Thanksgiving break.”

Many regular activities like basketball and other classes are being affected by the repairs.

“We had to make major adjustments such as going into a classroom setting and doing bookwork and written tests,” Phillips said.

The gym floor is 98 feet by 125 feet, and certain steps had to be taken before it could be replaced.

“The floor has been there since 1987 and they had to take out the sleepers underneath and place new ones,” Phillips said.

The process involved removing all the bleachers from the gym as well as the volleyball court and making sure the floor was leveled before nailing the flooring.

“They nail the actual flooring to the 2x4s and then sand it, put back the court markings and the finishing touches on it and once it’s done we can use the court again,” Phillips said.

But with the repairs underway on the gym floor, Philips gave some tips on how to preserve a gym floor and make it last longer.

“Resurface and sand it every year, clean it and sweep the dirt off the best you can,” Phillips said.

The gym is expected to be used for intramural basketball, volleyball and even indoor soccer this semester.